If anything is common about flooding, it takes uncommon events to create the worst ones. As a rule, an ordinary winter will produce ordinary high water, which will run off in ordinary ways, in order to allow us to experience ordinary springs and summers.

When "extra" is added to "ordinary," we end up with floods like the ones that hit the Ohio-Indiana river basins in early 1959.

Those were the last major floods that Fairfield didn't endure but ultimately paid the price for having witnessed. We heard about it on the news.

The Department of Interior, head groundskeeper for the U.S. Geological Survey, was prepared to research the outcome of a flood. All it needed was the flood.

Those extraordinary events began in December. Extremely cold, colder than it had been since the 1800's, the USGS report showed. And dry, much drier than usual, maybe drier than it had been in 4 decades. The rivers and creeks from Pennsylvania to Illinois were at pool stage. There just wasn't much water in them.

And they froze solid. The ground froze, deeply. And the freeze just got worse. Temperatures as much as 20 degrees below normal lingered for weeks in December. The ice on the rivers got deeper. Rivers that don't have much water in them tend to freeze more deeply.

Understandably, in previous years, the flooding had been such that soil and water management had been efficient in constructing dry reservoirs along the streams that reached back into western Pennsylvania, along the routes past Cleveland, southwest through Dayton, Hamilton, along the Miami River where it met the Whitewater ... and onto the Ohio. That would matter because the flood-control projects came with monitoring systems -- systems that would come into play after the 1959 horror show had ended.

On January 13, the weather took a turn. A two-day rain came as the temperature suddenly rose. Rain came and trickled along the stone-solid ground, into the creeks. The creeks began to fill from the bottom up, raising the ice, cracking it ... and sending it into motion. Then it froze again.

A week later, the deluge came, breaking up the ice again and causing heavy snow to melt.

Rivers in north-central Indiana began to rise, the ice began to shift and ... finally it began to move. It was also moving in Pennsylvania and Ohio. And it was going where water goes -- downstream.

FYI: The ice, as it is wont to do, will move slowly downstream in the form of huge floes, piling up on itself as it negotiates bends in the river. At times, it will jam up and create an ice dam. When that happens, water behind it rises rapidly, often several feet within a few minutes. Flash flooding occurs. Then, the ice breaks up, roars on downstream ... and repeats the process again and again until the floes are broken up. Floes can be 20 feet square and 18 inches thick.

Two weeks later, on Feb. 9, the rains came again. The rains that had soaked the soil two weeks earlier had saturated ... and it froze again. The February storm was located more to the north of the Whitewater Valley. Its impact spread southwest, away from Indianapolis, but it wrought havoc in many Indiana towns. The damage in the Whitewater Valley had already been done.

"This intense rain falling on ice and frozen ground resulted in the greatest flooding in 46 years at numerous points on the Wabash River and may have exceeded the floods of 1913 at some points. The runoff was quick and was unretarded. ..."

The Miami River Basin, where the Miami Conservancy District had years earlier set into motion a series of flood-control measures, was in the area of intense rainfall in January 1959. "The five retarding basins of the Conservancy District minimized flood stages and damages on the main streams, but uncontrolled tributaries caused widespread damage. Some damage on the Miami River below the reservoirs was due to encroachment on the flood plain."

Major damage was done to homes, businesses, fields, railroad beds, and highways. Estimates of flood damage in Franklin County, which was one of the five counties in southern Indiana declared a disaster area by the Small Business Administration, averaged $1,600,000.

In the south end of Brookville, 200 residents were forced to evacuate when a levee on the East Fork broke.

The stage on the Whitewater at Brookville was the highest since 1913, according to local residents, but it was 11.2 feet lower than the 1913 peak stage. So, it was worse than 1937, apparently.

It was the broken levee that sent up the final call to build the dam.

* Unusually high runoff of several small uncontrolled Miami River tributaries caused the peak flow of 108,000 cubic feet per second in the Miami River at Hamilton on the night of January 21, about 20 hours before the lower main-river peak.

*The town of Venice, Ohio, was almost entirely submerged. Industries were shut down in Hamilton, and 100 families were forced from their homes.

* In Middletown, Ohio, 100 homes were evacuated, and in the residential district, much damage was caused by a series of fires and explosions.

The end of Somerset

Ice jams along the Wabash and Salamonie Rivers backed up water, and flooded areas larger than would normally be inundated by discharges of similar magnitude. During the prevalence of ice floes on the Wabash River, ice jams covered about a 14-mile reach of the river, from Delphi to Georgetown.

Although it was feared that in the breakup of these ice jams. many of the Wabash bridges might be swept away, but this destruction failed to materialize. However, the damage to bridges, bridge approaches, houses, factories and livestock on the Wabash River and its tributaries was great.

Wabash was one of the hardest hit areas during the February flood. Families were evacuated from 115 homes, and 7 factories were surrounded by water when 40 city blocks on the south side of Wabash were inundated. Flash flooding from ice dams on two small creeks, one in the city and one in a small suburb south of the city, trapped residents without warning.

In 1964, the Salamonie Reservoir project began, forcing the eventual relocation of the town of Somerset, Ind.

In all, 1959 was the most significant flood of the 20th century because it provided incredible data on water flow. The USGS, in its report on the flood, provided extremely detailed information on gage readings at more than 250 locations in Indiana and Illinois.

The government would use that data to move forward on a final proposal for building the dam at Brookville and other sites around Indiana. So far, we've seen nothing like 1959 since.

I've included two USGS charts that shows the complexity of detail in gathering data from the many sites in the flood's footprint. -- John 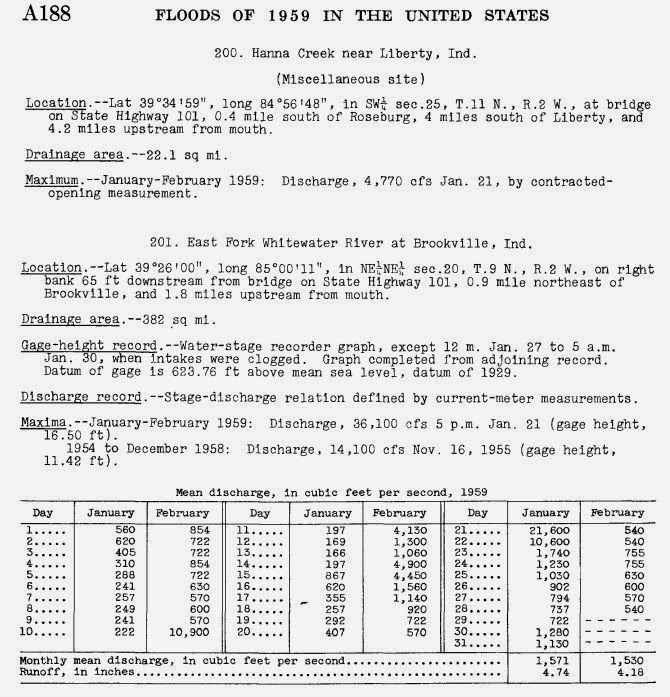 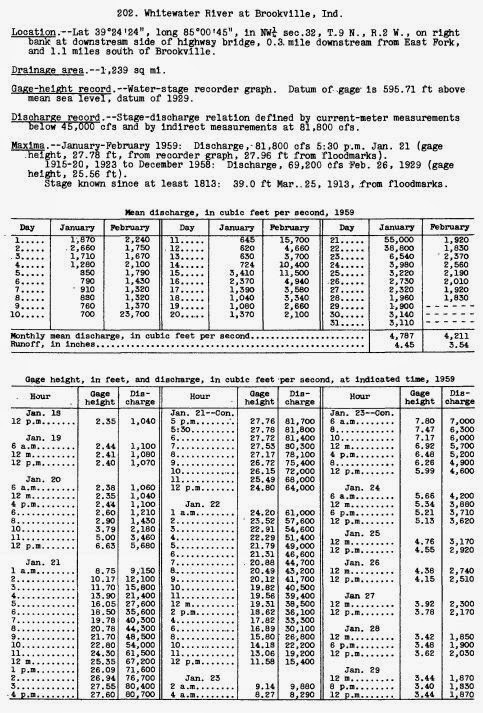 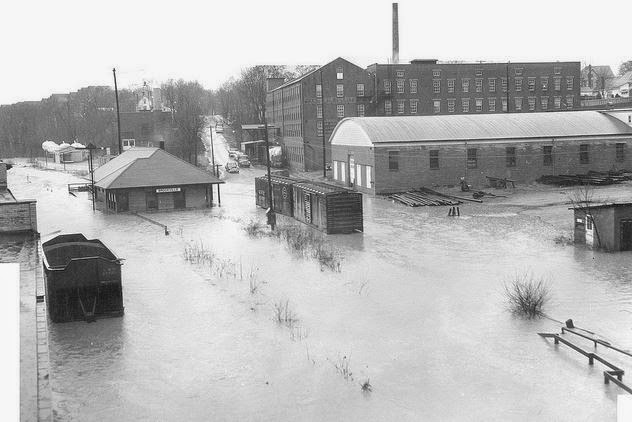 The Brookville flood of 1959