The 1960s marked a major shift for Indiana in terms of its infrastructure.

On several levels, the state crawled out of the past into a strange new era.

Mainly, the state's highway system began to improve with changes in federal funding and the introduction of a state sales tax (2% if you are counting). The interstate highway system was slowly gaining traction as well.

Meanwhile, the state dismantled its awkward and confused public school system, shutting down the rural township schools, shuffling the students into consolidated playpens that promised better education, better teachers, more efficiency and ... almost everything else that looked good on paper.

As the highways bypassed the towns, the towns became less a destination than an inconvenience. It would be a few years before the principle of the shopping mall would take root, but the menu was on the table.

And Indiana began to take stock of its natural resources. Included was soil and water management practices that would inevitably draw the blueprint for the Brookville Reservoir.

Brookville was one of several such projects in Indiana at the time, and the people of Fairfield gained considerable knowledge about the process by studying a similar scenario in the Wabash County town of Somerset.

The town was on the Mississinewa River and was, like Fairfield, moved to accommodate a federal dam in 1965.

An Indianapolis Times article in February 1963 explored life in Somerset as the shadow 0f the dam grew larger.

"The river won't stay away from Somerset's door, so the whole town is set to move." 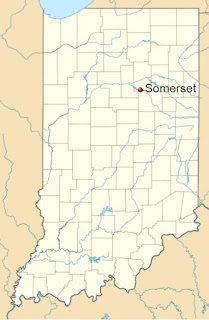 Somerset, as a town, eventually moved to a high spot not far from its original location, and the Times said that it was the only move of an entire unincorporated town to a new site, according to the U.S. Army Corps of Engineers.

Fairfield would not be moved for several more years, so it's not clear if it qualifies since the town itself was not moved, simply inundated. Semantics, I suppose.

Somerset was approximately the same size as Fairfield, population around 300, and was one of several communities in north-central Indiana along the Wabash Basin to be affected frequently by high water.

"People here are resigned to moving, but not giving up on Somerset," the article said. "An association of citizens was formed ... by local businessman Fred Snyder."

What separated Somerset from Fairfield is perhaps the coordinated effort by its residents.

According to the article, "The Army told us that if at least 50 percent of the 72 families having to move would agree to build another town, they'd build streets for us. We formed a corporation and bought a site," Snyder was quoted as saying.

Despite all that, the usual turmoil and angst over moving the community was real, according to the article.

"A majority will be hurt by it. One woman, born and raised near here who lived here in the same house for 60 years, suddenly lost her mind," Snyder told the newspaper. "We can't say all this business caused it, but she was all right until we got the word to clear out."

Most Somerset buildings were demolished during the construction phase, though some structures were moved to the new town. The complete buyout occurred sometime near the end of 1963 and the dam was effectively finished four years later.

And as could be expected, some residents felt they'd been deceived.

"What does get us," one man told the newspaper, "is that after they convinced us it was necessary (for flood control) and everything was settled, they told us the land around the reservoir would be used for recreational purposes too. This we do mind because we'll be living a mile away from all those picnickers and city people traipsing by our house going to the reservoir."

The relocated town is west of the original, just south of the city of Wabash.