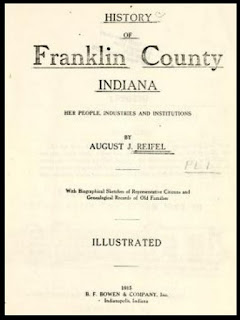 Depending on your philosophical point of view, time is endless. It has no beginning and no end, which invites a question: What came before the beginning of time? Was that a different time?

We are inclined to measure time.

One of the most endearing and fascinating sources was the August Reifel history of Franklin County, which was completed in conjunction with the Indiana celebration of its first 100 years (measured by a calendar).

Reifel completed his massive 1,200-page tome sometime after 1915, just ahead of the state centennial observance. I can almost hear the conversation:

"Augie, you gotta give us the final manuscript. We need to get this thing to press!"

So August Reifel sealed down the pages, shipped them off to the printer ... and then all hell broke loose.

"I warned you," Augie said quietly.

I learned that Reifel was one of only a few local author-historians who actually completed a county history ahead of the centennial. Another was done by Archibald Shaw in Dearborn County. I have referred to that work often, as well. Other counties either failed to deliver or produced something far less impressive. (Reifel, from about 1910, in the photo).

A lot of what's in these two monster histories is fluff. It's useless (by today's standard) biographies of people who dropped a couple of dollars into the collection plate to make sure their legacies were made immortal.

But the histories are practical and give a sense of how we viewed our past through the eyes of somebody who reported under the rules of engagement a century ago. In a phrase, you have to learn to read a different language. It's not your English. There are abundant examples across the spectrum of this blog.

Reifel's history ended in 1915. Time ran out. As far as he was concerned, the crank telephone was as good as it got.

The oddest part of the research that led up to the final days of Fairfield is that my main source of history is a scrapbook of old newspaper clippings. The last ones in the book are from 1966.

It was though our history ended that year, confined to a period of about 36 months (measured by a calendar).

If we've endured this long, we are aware that our history did not end.

History, like time, really doesn't end unless we say it does. At that point, time just moves along, ignoring our pleas.

What's ahead? Just some more history.

Lucky for us, we don't have to get this thing off to a printer.

"But wait, there's much more!"