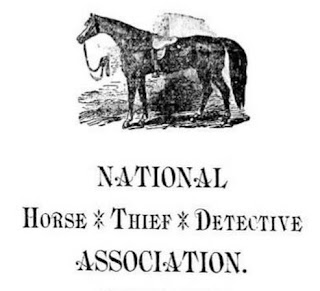 Indiana's somewhat untamed "upbringing" is not without its peculiarities.

One of the more robust components of those early years was a quite serious — though amusing today — attempt to control the theft of one of the pioneer's most valuable assets:

By the 1820s, Indiana had begun to sprawl geographically and found itself stretched pretty thinly in terms of law enforcement. In other words, prime picking for horse thieves.

An article in HistoricIndianapolis.com explains. "Without horses, travel was slow, plowing was impossible and getting perishable goods to market was a hopeless proposition. In the early 1800s, an epidemic of horse thievery resulted in some of the area’s crops being abandoned."

A stolen horse was no laughing matter. Life or death, basically.

The creation of the National Horse Thief Detective Association (there are variations on the title) was formed in 1865 and, owing to the critical nature of the matter, the agency was given broad powers. State-approved vigilante justice, but one hardly without merit.

The Historic Indianapolis article reveals that "organized gangs stole horses and operated so-called stations where stolen goods could be hidden. Station keepers were paid by gangs to help locate horses to steal and then to feed and rest stolen horses until they could be taken to the next station."

The scheme covered at least five states and went on for several years until Indiana's legislature acted, forming the detective association, giving it almost unlimited power. The association began its work in the west-central Indiana town of Wingate, with membership limited to “only the best men in the community." High morals were expected.

It's unclear if the detectives operated to any degree of efficiency in the Whitewater valley but their reach would have permitted it. The public took the association quite seriously, as seriously as it did horse theft. It's unclear how many horse thieves were captured or what punishment was meted out.

One can assume that hanging was an option.

By the early 1920s, the association was nothing more than an entry on a legal document in the Indiana books of law.

Until D.C. Stephenson heard about it.

Stephenson, who was the Grand Dragon of the Indiana Ku Klux Klan, got advice from the KKK's lawyer that the National Horse Thief Detective Association existed and that its powers were still intact.

Stephenson urged Klan members to simply rejoin, reform and retool. With its legislated powers that allowed for the carrying of weapons without much control, the horse thief detective association became the intimidation arm of the Indiana Klan.

Conveniently, there wasn't much the state legislature could do about it, or was willing to try. The Klan found a way of frightening its opponents without having to do anything except resurrect an 1865 law.

How broad was the association's reach?

"Little was said in the press about more physical forms of intimidation, although in September 1921 the Ledger reported the arrival of the Horse Thief Detective Association in northern Hamilton County. Within a few years the association had 9 or 10 companies operating throughout the county, with as many as 600 members."

The association most frequently targeted bootleggers, gambling establishments, and other moral transgressors, which allowed for some forms of revisionist history that aim to cast a softer light on the KKK.

There's not much clear evidence that minorities were overtly intimidated. It's difficult to believe that wasn't the case, however. It's probable that minorities, including Jews and Catholics, remained silent in the face of fear.

The association was as much civic organization as law enforcement agency — largely composed of white, propertied men who were wealthy enough to pay the dues. By 1926 there were still as many as 300 active companies in the region, some of which formed alliances with the Klan.

In 1928, the group dropped “Horse Thief” from its name, becoming the National Detective Association, in an attempt to rid itself of the Klan connection. The name change didn’t work. By 1933, Indiana lawmakers had repealed all laws that gave the HTDA enforcement powers. All such groups had dissolved by 1957, after horse thievery “had ceased to be a major problem.”