At the end of 1942, a guy named Fred Mohler was elected surveyor for Franklin County. At the time, he was also county highway supervisor.

A few months later, Mohler resigned as surveyor, claiming the two hats were too heavy.

The county appointed Merle John Updike as surveyor and the rest was technically history.

Ol' Merle was my grandfather but that's not really the point. Well, it sort of is the point, depending, I suppose.

Hell, Updike Road near the Fairfield Marina was named after the guy. I kinda was, too. He moved to Fairfield in 1943. On your way to the marina, the house you see at the curve is where he lived for a billion years.

The family called him "Pop" and he was evidently quite the character around the courthouse, surveying this and that, doing what surveyors do. He was a Republican, which has some bearing on all this. Not a lot, just some.

He was also elected every four years until 1972. During that time, he claimed to have named every road in Franklin County, from its southern corners to its northern border. Smokey Hollow, Coon Run, Gobbler's Knob ... sounded like a ton of fun.

I suppose, as important people go in rural areas, the surveyor is perhaps as useful as any. Most county offices do serve a significant purpose though much of that has changed with the growth of new and diverse technologies. Still, in Merle's time, knowing which rock was on which side of the creek was a pretty big deal.

Fences and all that.

The Richmond Palladium-Item was one of a couple of newspapers which covered Merle's 83rd birthday party in 1969, establishing that he was perhaps the oldest active elected official in Indiana at the time. He also ran for another term the previous November.

Merle's history is interesting but perhaps more from a note of peculiarity than actual deed. He did attend Purdue in 1909-11, which probably was a rare achievement for a kid from Whitcomb. The Updikes, by the way, are very early settlers in that part of the county, going back to about 1812.

Merle also had a connection during the 1920s with the Indiana Ku Klux Klan, though there's no reason to believe it was anything beyond political expediency. The family by and large was part of a strong abolitionist thread that came west to Indiana from New Jersey. Updikes (or a variation in the spelling) in America date back to the late 1600s with Dutch heritage.

The family moved to Fairfield after the Great Depression and Merle apparently held a number of other jobs before assuming the surveyor's post. I have no idea what salary he might have drawn but he did do private surveying, which would have paid separately.

His obituary did not merit coverage on Page 1 of the Brookville newspapers. 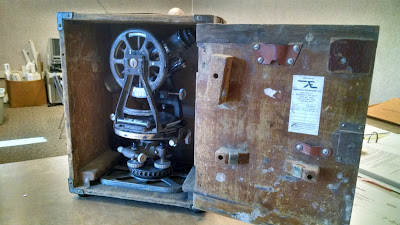 The Franklin County Surveyor's office has lots of old maps and documents that Merle produced during his years and still has the equipment the old guy used to mark and measure virtually every square foot of the county -- except the parts where a lake is located. 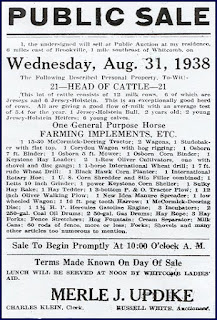