A skip through the old newspaper archives reveals an eerie consistency to the Whitewater River.

Even in years it didn't create major havoc, which is explored in a series of blog items from March, the residents of the valley found themselves at odds with high water.

But most of that was south of Brookville, which is of course not where they built the dam.

"The Whitewater reached a stage of 22.45 feet last Friday, the highest since 1937, flooding lowlands and inundating a number of highways.

"The river's stage, determined by the U.S. government gauge on the bridge near the county infirmary, had fallen to 18.7 feet, however by 7 a.m. Saturday and continued to fall rapidly thereafter. Rainfall which continued for the great part of the day Friday, measured 2.98 inches.

"Traffic was stopped on U.S. 52 south of here Friday night after backwater made travel impossible near the Whitewater filling station north of New Trenton. Also north of Harrison, near the dog track, the river flooded a section of the highway.

"The state highway out of Cedar Grove was also reported closed as were the Oak Forest, Blue Creek and Wolf Creek roads. Duck Creek was out of its banks, flooding sections of Metamora. Other county roads were impassible for a time."

At least twice in 1949, the river played antics.

"The waterfall (Tuesday, Jan. 4) sent the Whitewater out of its banks at Brookville and numerous other places along its route. At 1 o'clock Wednesday morning, water was lapping the top of the loading dock on the west side of the Volney Felt Mills and a rumor was circulating outside the building which was completely surrounded by water that there was an estimated 6 feet of water in the building. 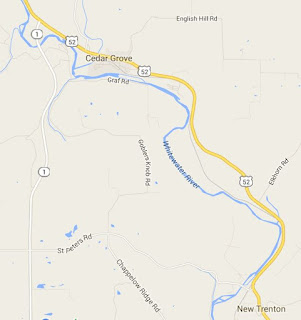 "Both the East and West forks continued to rise until 4 o'clock on Wednesday morning when it was reported the river just south of the junction of the two forks had risen to a height of 26 feet (flood stage being 20 feet). At this point the water started receding.

"U.S. 52 between Cedar Grove and New Trenton was closed to traffic Tuesday evening.

"Mail and express shipments were delayed ... a number of school buses left early in an attempt to beat the waters but it was reported several children were unable to reach their homes that evening and were brought back to Brookville where they were put up for the night.

"Greyhound bus service out of Brookville was discontinued Tuesday and has not been resumed as yet by noon Wednesday."

"Two women and a 10-year-old girl ... are reported to have gained a new respect for the 'quiet waters' of the Whitewater following their experiences of last week.

"The women, who had been camping on a sand bar near Cedar Grove were discovered standing in water up to their waist and the child was said to have been clinging to the limbs of a young seedling, to keep her head above water, about 5 o'clock last Thursday afternoon.

The three were caught by the sudden rise in Big Cedar Creek and the river following the heavy rains early Thursday morning. The were said to have been in the water since 10:30 that morning.

"Another unidentified woman, said to be a motorist from Cincinnati, discovered the plight of the campers and summoned aid.

"Rescuers from Cedar Grove came to the rescue but owing to the swiftness of the current, difficulty was experienced in reaching the three. An ingenious method, whereby a length of rope was fastened to the boat and thence to one tree and another was worked out, and the rescue completed.

"Their tent and all their possessions were washed away. They were clad in bathing suits at the time they were caught in the high water."