By the start of 1965, it had become clear that the federal reservoir was no longer a possibility but a reality. The construction of a Corps of Engineers control tower just north of Brookville on the East Fork had settled the discussion.

It was the town's tombstone.

Various newspapers dabbled with the fate of the community over a couple of years, most of them achieving the same objective with virtually no twist on the concept.

How did people feel about leaving Fairfield for "somewhere else"?

Joan Chapman, a Fairfielder who worked as a correspondent for the Richmond Palladium-Item, was more thorough than some others when reporting on the slow, painstaking process of pulling up stakes and finding a home "somewhere else" other than Fairfield.

Her three-part series in January 1965 was insightful.

"I wish they'd do what they're going to do," Ora Linegar was quoted as saying, "so I'd know what I can do."

Linegar, whose farm was on the north edge of town, was like many who were waiting for the federal government to complete the process for buying the land and giving residents some direction about what to do next.

Not much direction came. Slowly, the houses were purchased, the school closed, and the residents began to scatter. Most stayed within driving distance of Fairfield because their jobs were still in the area.

Some found homes in Liberty, Brookville, Connersville, other similar towns. Farmers mostly just "moved to town" and gave up the business. It was hard to find another farm.

Joan Chapman wrote: "To date about $756,000 has been appropriated for construction of the dam. Only an act of God or a national emergency will stay these plans."

Said Willie T. Davis, who had owned a grocery: "It would mean the end of us and I am not sure what we would do. But if the dam is for the good of Franklin County, then I am all for it going in."

An odd conflux of emotions.

A peculiar event had taken place a couple of years earlier when Clarence O'Hara, in the face of the impending reservoir project, built a house in Fairfield.

"Undaunted by the coming deluge, this man's courage has enabled his family to experience the unique joy of a brand new home for the past three years."

The house was eventually moved north of Liberty.

Joan wrote: "But it will only be in retrospect, many years hence, that we may evaluate the courage, stamina and resourcefulness of the people of this small Hoosier community."

Joan and Bob Chapman eventually moved their house north onto old S.R. 101 and lived there until both died. 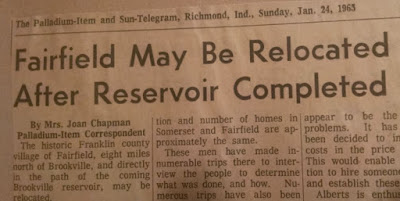