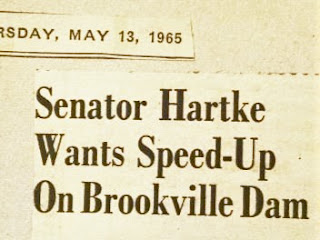 Our evaluation of the politics of the 1960s was more genteel on a lot of levels than it would be today, but the nature of our federal government following the Eisenhower years was decidedly Democratic.

A strong executive branch that grew out of the Franklin D. Roosevelt years was still in evidence when John F. Kennedy defeated Richard M. Nixon in 1960. Generally, it seems Nixon was just in the wrong place at the wrong time, though it's likely he'd have continued the Eisenhower policies had he been elected.

Too much detail probably. Books are abundant on the years Ike was president, and it's fair to assume that he'd have approved the Brookville reservoir project had it been offered by Congress.

Following the thread toward the actual approval of the funds to build the dam, much of it connects to Lyndon B. Johnson, who was installed as president after Kennedy was assassinated in November 1963. Johnson had established himself as a molder of policy during his years in the Senate, and that was reportedly still much in evidence after he became president.

In effect, what LBJ wanted, LBJ got ... and he launched a strong federal approach to the nation's ills, including his "war on poverty" and "Great Society" themes, some of which is being debated today for their effectiveness, or lack thereof.

But public works projects met with less resistance, and the funding of such behemoth tasks as damming up entire river valleys was precisely what Kennedy had envisioned for America when he was elected:

Our country is too strong to fail. We can even go to the moon if we work together. Democrats in Congress agreed with that and moved forward on ideas that had been advanced by Eisenhower, re-defined by Kennedy and driven home by LBJ.

A dam on the East Fork was more than just a lake. It was America being great, America taming its resources, America proving that a river is just a river.

Indiana's elected representatives in those days were mostly sturdy Democrats. Sen. Vance Hartke had been elected in 1958 and Birch Bayh after that. Both were Kennedy Democrats. Bayh actually served as the principal speaker when groundbreaking ceremonies were held in December 1965.

The state's 9th Congressional District, which included Fairfield, had been governed by Republican Earl Wilson for approximately 390 years -- give or take a semester -- before Wilson was replaced in 1964 by Democrat Lee Hamilton, who will be explored in another blog piece. (Wilson was a supporter of the reservoir project.)

Weaving in and out of congressional politics was an exercise in futility, particularly prior to the final appropriation of construction funds. But futility was just a word for those who principally opposed the reservoir and openly valued a watershed program. Another story, another blog item.

The money for building the dam, as well as other flood control projects in Indiana, came through the Senate, all part of a $4.4 billion public works bill. In all, $27 million was earmarked for Brookville, some of which was provided by the state of Indiana to "insure that the state maintain control of the water rights and storage."

Brookville provided its own muscle to the project as it moved through the political process. A flood control association was formed in 1959 following a devastating flood that hit the town when its levee broke. At least $30,000 in federal dollars went to the association to study flooding, with the help of the U.S. Army Corps of Engineers.

That study data was used to promote a positive vision for building the dam. Once LBJ's public works notions began to take root, it was simply a matter of adding a million here, a million there ... and America would indeed turn a river into a lake.

By the middle of 1963, the answers began to apply to the questions. The lake was inevitable.

Along the way, changes in plans accompanied ongoing studies.

In summary, almost anybody who mattered was in favor of the reservoir project, for diverse reasons.

All those opposed may go somewhere else to live.

In Brookville, they held a parade. 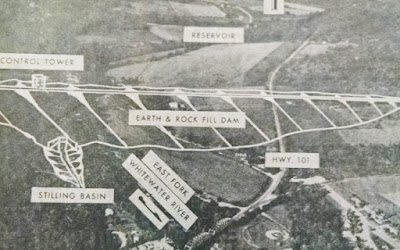