History from the ground up -- Part 1 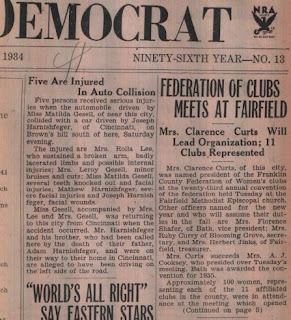 It's safe to say that in the absence of excitement, we hazard on the side of being amused when it comes to the presentation of Fairfield's history after World War I.

The war itself provided its own drama and intrigue, particularly when we consider how many men who took part and, by extension, nearly everyone whose lives they touched.

The time frame after the war and the years leading into the Great Depression is best marked by the way it was presented in the local news media.

In those days, the media was essentially limited to the weekly newspapers that originated in Brookville. One presumes that similar news was printed in the nearby Liberty newspaper but for our purposes, the Brookville Democrat-American will suffice.

Newspaper publishing in those days was designed to tell the town about ... well, the town. Random sampling works nicely.

To be honest, thumbing through those old bound archives is a labor of love. It's easy to lose focus and easy to stop and say, "This stuff is amazing!" to almost anybody who's in the next room.

To begin, the modern notion that the government and the mercantile industry are robbing us of our privacy -- bosh! In those days, you knew almost everything and only paid about 10 cents a week to know it.

"T.M. Conwill is very feeble as of this writing."

"Mrs. Jinks is recovering from injuries suffered in a fall at Thanksgiving while visiting her daughters in Richmond."

"The Browns are visiting friends in southern Indiana and won't be home until Friday."

So, feel free to hop right on over and help yourself to the eggs in Heloise's chicken coop!

Random sampling suggests something rather odd ... dating back to about 1924, which was my place to start for no good reason. Some of the names of the people we knew toward the end of Fairfield's existence were the same names who appeared in those early community reports.

I have no idea who created those weekly town reports, but I have a hunch it was "Mrs. George Jinks," who would be "Julia." (If you remember Mrs. Jinks and the day she accidentally set fire to her barn, you are a true Fairfielder.) 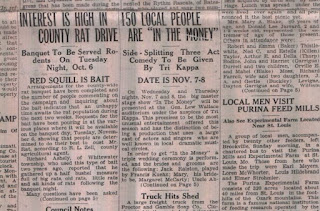 Addressing, in third person, a woman by her husband's name (Mrs.) was traditional social etiquette until probably the 1970s. Unmarried women were "Miss" ... not "Ms."

So, "Mrs. Frank Husted" was how you knew her, unless you knew her. ("Old Goat" might be an alternative, I suppose.)

Most of the weekly reports are similar. They deal with people visiting, people having birthday parties, children being born ... mostly people visiting other people. What isn't news to you is a big deal if you have to cook two chickens for dinner or provide an extra serving of cornbread.

And you spent the next four days discussing what was discussed when the people who came to visit had topics they wanted to discuss. Remember, the telephone existed. If you had one, you probably shared it with all the other people who didn't, so visiting was about the only way to learn what was growing in the fields on the other side of Herman's hill.

You can spend all day on these old papers and come away with a sense of peace that just isn't allowed to happen now. Life was slower then, much more practical, and probably a whole lot more fun.

"Mrs. John Banning is better at this writing."

The newspapers were not short on interesting tidbits. Some of that, in another blog item.

"Personette Sisters Concert Co. will give an entertainment at the Fairfield M.E Church, Oct. 30. Sponsored by the M.E. Church. Admission 10 and 20c."

How can it possibly get any better than that?

The newspaper archives are on microfilm at the Brookville library or are in bound volumes in the old high school on Franklin Street, in the clerk's office (once upon a time, aka the home-ec room).