History from the ground up -- Part 7 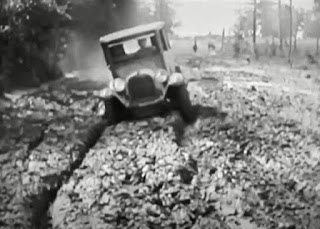 By 1922, Indiana's attempts to improve its roads bordered on the unpredictable. Most winters yielded uncompromising discomfort the following spring and it's probably worth noting that Franklin County's roads were never much more than acceptable.

But the Brookville Democrat published a few articles in 1922 that suggested at least somebody was paying attention to the problem -- somebody who maybe didn't have to drive on the slabs of slop.

"The weather during the last few weeks has put the roads in bad condition. Even the state and county roads that had been frequently dragged during the winter became badly cut through in many places. It is going to require a great deal of work and and an expenditure of large sums of money to restore the roads to normal conditions. Running heavy trucks when the roads are soft caused much of the damage."

And in the nick of time, the federal government came to the rescue, sort of.

Of all bureaus, it was the Department of Agriculture that took the lead on presenting a plan to at least address the problem of bad roads.

The Democrat's article explained the plan.

"A new instrument devised by the bureau of public roads of the U.S. Department of Agriculture measures with scientific precision the effect of every shock and blow delivered by moving vehicles in crossing a bridge.

"Attached to any part of the bridge structure, this instrument makes a photographic record of the effect of the moving load. The amount of stretching or shortening of the part as a result of the shocks is represented by a fine black line on the photograph.

One can presume from this article that the engineering required to make a stable bridge was enhanced by the device.

"It has been necessary to make a liberal allowance for this unknown quantity. In some cases the allowance has not been sufficient and bridges have collapsed under moving loads."

The article went on to say that many bridges were, at the time, probably too weak to handle the larger trucks that had begun to move commerce across a rapidly changing America. It was an era where truck commerce was unregulated. If you could get it on the trailer, you could haul it.

About all they had to go on in those days was a guess at how fast one ought to be driving when crossing a bridge.

"It is believed this new measuring instrument will soon do away with uncertainty. The knowledge gained by its use will enable the engineer to design bridges which are sure to hold up under fast-moving vehicles and to build such bridges without undue waste of material and money."

The USDA's control over roads during that time is perhaps peculiar but it was largely an agrarian economy that used the roads. And bad roads were bad for business.

The USDA estimated that farmers lost more than $300,000 in value in 1921 due to their inability to move their goods over shoddy roads.

"Roads that are impassable during part of the year cost farmers in every community thousands of dollars a week. When one stops to think that in every township laid out in sections, there are 72 miles of roads, it is easy to imagine the mileage of roads in this country," according to an essayist examining the problem for the USDA.

"It would be excellent if we could have all hard roads -- brick, concrete or macadam roads, which are good all-year roads. We should have more of them. But it is impracticable to pave every country road. However, it is just as important to have good laterals leading to the main roads. So we must do the best we can and properly maintain our dirt roads and streets."

"Twenty-one thousand miles of roads have been built with federal aid in the last five years (1918-22), and these, of course, help out a whole lot, but progress may have to be even greater in road building unless the automobiles are to take turn about."

"Motortrucks ruin pavements about as fast as they are laid. As fast as pavements get stronger, trucks get larger and loads heavier."