History from the ground up -- Part 8

As was wont to occur in those olden days, the topics on the table were frequently discussed, debated and dissected in the weekly newspaper. 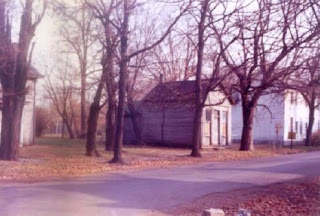 Evidently a discussion of sorts concerning the origins of the various religious sects had emerged in 1927 in the Brookville area, and the weekly Democrat allowed for exploration of the topic by none other than the fabled Dr. Abraham Preston of Fairfield.

Doc Preston's office was a somewhat unusual icon along Main Street in Fairfield, even to the end. It sat closed up, gathering whatever time and paper gather ... and we just walked past it every afternoon after school. (Yes, we have a photo!)

In any case, the Aug. 25, 1927, edition of the Democrat allowed Dr. Preston to elaborate on some of the nuances of that, which was headlined:

Dr. Preston Gives Us More
Facts from the Pen of
Dr. Goodwin

"For the benefit of the present day readers of your paper, I am moved to add more from the pen of Dr. Thomas A. Goodwin, which you have pleased to call 'Religious History of Franklin County'.

"I have gone around the Whitewater Circuit as it was fifty years ago. I am indebted to Rev. Joseph Tarkington who traveled the circuit in 1833 on a salary of $148, for important data as to the list of appointments. At the Conference of 1835, all north of the north line of Franklin county was set off to the Liberty Circuit, and the remaining portion constituted the Brookville Circuit."

And so on went Dr. Preston in what Dr. Goodwin had revealed about the formation of various Methodist divisions in the valley.

"The first preachers on this Brookville circuit were Boyd Phelps and Samuel M. Reeves.

"From some cause I have no recollection of Mr. Phelps. He located soon afterward. Mr. Reeves was a very pleasant man. The preacher who followed the next two years was, taking him all in all -- one of the most useful men that had ever been on the circuit, and I doubt whether he has had any superior in the forty years that have since elapsed. The first year that Henry S. Dane traveled Brookville circuit, he was encumbered by a young man of high ambition but very moderate abilities."

Dane had come to Indiana from Vermont and apparently was supposed to "check in" in Bedford before being dispatched to his assignment.

As some juncture upon arrival in Franklin County, Dr. Goodwin write that "Christopher Masters at Fairfield gave him a home free of rent if he would live in Fairfield. During the two years he traveled the circuit, he did much toward building Wesley Chapel and the churches in Blooming Grove and Fairfield, and bought the parsonage in Brookville, and made preliminary arrangements to build the church in Brookville."

"The present wholesome moral atmosphere of Fairfield owes much to him, Dane was often eccentric -- perhaps always. He had a quaint way of saying things that (he) always told."

Confusing use of the language, to be sure. In a phrase, you probably just needed to be there to know what Doc Preston was sharing from the "pen of Dr. Goodwin."

Preston reveals in his treatise that there "was no Methodist meeting hose east of the East Fork until 1837, and there was no preaching on Sunday by local preachers except that occasionally the preacher who preached at 11 o'clock in Brookville went to Fairfield in the afternoon instead of to Ebenezer, once in two weeks."

Ebenezer Church was located a couple of miles north of Brookville on S.R. 1.

Without context, it's difficult to ascertain Doc Preston's motives, other than he was a scholarly sort, and clearly took an interest in the intellectual conversations of the day. Discussions about the origins and history of the Methodist Church were always in favor.

And as we know, the Methodist Church was quite important in the lives of most who lived in Fairfield, even at the end.

It's worth noting that Doc Preston's long and wordy "letter to the editor" was prominently displayed on the front page of the newspaper and was carried over to Page 3.

Fairfield: Town Under the Lake reveals:

The December 2, 1967, Indianapolis News reported that “Prof. Warren Roberts, Indiana University Folklore Institute, dismantled the doctor‟s office, gently and gingerly. It will be shipped to Bloomington and reconstructed complete with many of the pioneer physician's instruments. The office is thought to be about 100 years old.”

Roberts and IU never got together on the project and the reconstruction of the office did not happen. In fact, the land was sold and it's likely that the building, in whatever shape it was in 50 years ago, is in slightly worse shape today. If it exists at all.