History from the ground up -- Part 5

Sometime in the summer of 1925, Gatch Miller of Lawrenceburg visited friends in St. Leon.

That same year, Indiana's legislators came down hard on what had been the scourge of civilized society.

According to the Brookville Democrat, the Indiana House ... "with a single dissenting vote ... passed the most stringent prohibition enforcement act ever enacted into law in Indiana." 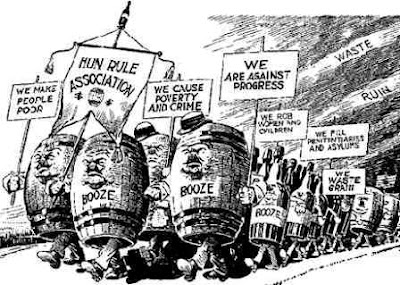 The 1920 Volstead Act outlawing the consumption, production and sale of alcohol, was a mere piker compared to what Indiana approved.

The newspaper report continues, explaining that unanimous approval of a co-operative marketing bill also passed the House, an agriculture measure that was also part of the Volstead Act, generally related to Prohibition.

The prohibition law included "provisions whereby a judge is prohibited from suspending sentence on third offense; accepting evidence obtained on faulty search warrants as valid, and generally strengthening the penalties for the violation of the prohibition enforcement act."

It's difficult to see how these changes qualified the Indiana prohibition law as "more stringent" but it's a cinch the abolition of booze was a work in progress for more than one state legislature as the decade inched along. Being politically against booze was something separate from being really against booze.

The cooperative marketing bill was a method for allowing farmers to move grain products that they were being prohibited from selling for production of whiskey or beer. Farmers had been typically opposed to Volstead for that reason.

In essence, the legislation of 1925 allowed for the corporate establishment of Farm Bureau cooperatives that exist today in modified forms. It's worth noting that specific years for specific legislation varied from state to state and the agriculture industry was more flexible than others, depending on ... well, the state of the crop from region to region.

The legislature also came down hard on folks who didn't pay their bills. A measure by state Sen. Denver Harlan of Richmond gained approval. "It is directed at those persons in all classes who do not pay their bills, or do not intend to pay them," Harlan said in the Democrat report.

Admittedly, not much about that competes with what Gatch Miller had on his mind when he trekked up the valley to St. Leon that summer morning.

But it is important to know that the weekly newspaper in those days did present state and national news of merit, aiming it at an audience that was keenly interested in the subject matter.

Meanwhile, the Jinks family:
We thought you just needed to know that.