If you were to compile a list of the five most important people in the 20th century, you'd not include a guy from Greensburg.

If you were to compile a list of the five most important events in Indiana in any given year, you'd probably put the Indianapolis 500 auto race at or near the top.

Carl G. Fisher, the guy from Greensburg, is responsible for that.

I stumbled over one of those puffed-up biographies about Fisher, one that suggested he was a great guy, chronologically and without accentuation.

As it turns out, Fisher's history is laced with 'holy cow!' moments, starting around 1904, about the time Indiana was settling in for a full-bore attempt to become relevant as a state. Mostly agricultural, the natural gas boom of the 1880s gave Indiana an anchor into industry and as the automobile began to emerge, boastful notions took root.

According to a history in a book called Yesterday's Indiana by Byron Troyer (1975), Fisher, born in 1874, was a grade-school dropout who began selling bicycles as a teenager in Indianapolis. He eventually drifted into the new and exciting world of automobiles.

By 1904, Fisher and business partner James Allison (of Allison engine fame) managed to perfect an acetylene lamp that could be used as automobile headlights. A Frenchman had invented the device and had no interested buyers.

That's the simplified version of Fisher's early life. One can surmise that he had something of a genius point of view. He caught on to the process and after 1904, was promoting the auto as the deal of the decade -- and he set up the first automobile dealership in Indiana.

The more complicated parts follow. Fisher had some pretty big ideas. In 1909, he bought some land in a rural area northwest of Indianapolis and did what all people who make things do -- he decided to race it.

By 1909, Fisher's massive Indianapolis Motor Speedway was ready to roar, though the first races were tragic and disastrous. In 1911, the first complete '500' was run on the brick track. More than 3.2 million bricks were used to pave the course.

Why? Fisher wanted to see if he could make cars go faster and better. The race was simply an endurance test. Auto builders from all over the country were interested.

Why stop there? Fisher, a couple of years later, promoted and sold the idea that a transcontinental highway should be built. It's known today as U.S. 30, cutting across the northern part of Indiana. In those days, it was called the Lincoln Highway. Private money spurred the highway's development but Fisher, in close with President Theodore Roosevelt, got a little government help for the 3,500-mile road.

A Wikipedia entry claims the Lincoln Highway was a major influence on President Dwight D. Eisenhower when he proposed and oversaw the beginning of the interstate highway system.

Three years later, Fisher advocated and sold the idea for the Dixie Highway, a road that linked Chicago to Florida, where Fisher owned real estate he hoped to sell. It worked. Miami Beach is the result of Fisher's entrepreneurial spirit.

Not all of Fisher's grand schemes worked and he eventually went broke during the Depression while expanding his transcontinental ideas in Long Island, N.Y. 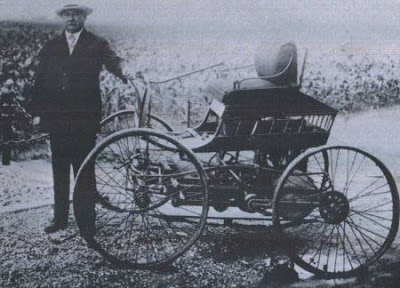 Elwood Haynes of Kokomo (above) was a 19th century metallurgist who perfected a number of steel alloys that helped fabricate the first American automobiles. He is recognized for having created in 1894 the earliest American design that was feasible for mass production.

At the end of 1894, Haynes joined with Elmer and Edgar Apperson to create an automobile company and began producing cars that year. Their company is recognized as being the first viable automotive company in the United States, and the second company to produce autos commercially.

The early cars weren't particularly popular since they didn't haul anything and required maintenance that nobody understood.