Occasionally, I stumble over some names of people who have vague Fairfield connections with even more intriguing histories, not because of who they were but what they almost accomplished.

Or did accomplish without anybody paying much attention.

Two of them are from the same family.

Bassett, according to an old biographies book of pomp and praise, was "a representative of an honored pioneer family, long identified with the growth and development of this section of Indiana, and with the promotion of its farming interests."

Wilson, meanwhile, was Bassett's son-in-law. His history is even more strident, according to August Reifel's history. There's not much difference in the content of these biographies. They are propped up by the families and are long on geneaology and short on substance.

But in the case of Bassett and Wilson, it's what they almost achieved that makes them interesting. And to some extent, a stretch of imagination ties them closely to Fairfield. It's likely both were instrumental in the building of a Methodist church congregation in Fairfield and were likely involved in the construction of the church itself, which was one of the largest in Franklin County at the time.

Bassett was born in Fairfield Township in 1832, his family origins being New Jersey, as was pretty typical of people who settled in the northern edge of Franklin County.

Bassett's father was a brick mason and David learned the craft in Cincinnati, brought his talents to Fairfield and bought some land east of town, in the Farm Hill area.

The biography says Bassett "erected some of the best buildings of that day in the surrounding country."

Bassett and his wife "were both consistent members of the Methodist church and were leading advocates of the temperance cause, the father ever admonishing his sons never to take the first drink."

The hyperbole continues about Bassett, who apparently was somewhat of a land speculator and would-be entrepreneur. Eventually, he bought property in Bath Township in Colter's Corner (aka Old Bath) and set up a tile manufacturing business. He then went into meatpacking.

He is also credited with having turned a log cabin into "his present commodious two-story residence. He has also cleared the land, placed many rods of tiling upon it and now has his farm under a high state of cultivation."

Bassett was married to Matilda Fry, daughter of Henry Fry, a somewhat influential landowner who ran a farm and grist mill on Templeton's creek in Fairfield Township.

Fry was lauded as a central character in United Brethren church affairs. 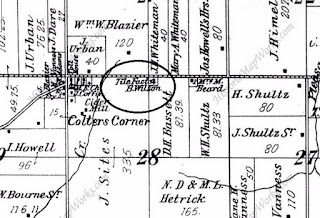 Meanwhile, Charles V. Wilson, son-in-law of David Bassett, evidently saw future in tile manufacturing as well and ran such a business with his uncle Robert in Colter's Corner toward the end of the 19th century. An 1882 Atlas shows a "B. Wilson" tile factory. It's difficult to pin down dates. They weren't always written to be authentic. One can assume the businesses were in a state of flux. Open for awhile, then closed.

Tile-making wasn't particularly lucrative for any of the family but it did suggest that enterprise was not lacking, even in rustic old Bath.

Wilson was described by Reifel as "one of the best citizens of this community and is ever ready and willing to do anything in his power to advance the interests of his friends and neighbors along social, moral, educational or material lines."

Wilson was a staunch supporter of the Methodist church, the biography reveals.

Bassett and his wife are buried in Old Franklin cemetery east of New Fairfield. Wilson's name shows up in a cursory search in Union County (died, 1952).