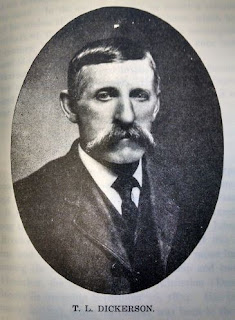 It's probable that most people who became famous were born somewhere. It's unlikely that anyone who becomes famous in the future can say they were born in Fairfield.

There's still time, I suppose. If you were born there, you are in a distinct minority.

Here and there, a nugget -- literally.

One is Theophilus L. Dickerson, who became one of Indiana's leading archaeologists in the 19th century.

The sketch, probably produced by somebody besides Reifel, tells of Dickerson's achievements:

He was born in 1841 on a farm near Fairfield and "received his education in the (Egypt Hollow, Saltwell) school, Brookville College, the state Normal School at Terre Haute and Ingleside Institute at Peoria, Indiana."

That would be Peoria, Indiana. The one in Springfield Township.

"He began teaching when a mere youth and taught for some years in Franklin, Union and Fayette counties."

In any case, Dickerson got the itch to travel in 1864 and joined a number of Franklin County adventure-seekers on an overland "prairie schooner" to the hills of Montana (not yet a state).

Apparently they didn't find much and it would appear that, broke and homeless, T.L. Dickerson decided to stay on in the Bozeman area, were he organized and taught school for all the gold he could carry.

About a hundred bucks worth for a month's work.

The year in Bozeman was enough to fuel his ability to move on.

"In the spring of 1865, Mr. Dickerson went to Helena, Montana, and entered the employ of the St. Louis Gold, Silver and Copper Mining Company."

It was there that he became intensely interested in mineralogy and its allied branches ... "and this has been his consuming interest ever since."

The biography asserts that Dickerson had been fascinated by the prehistoric past and ... "for more than half a century has been an indefatigable collector of archaeological relics of all kinds."

Certainly the Whitewater Valley was not berift of such relics, since the ancient Mounds people were clearly identified in numerous places.  See our HOMSHER link. 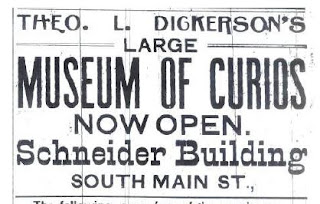 At one point, Dickerson established a museum in Brookville to display "thousands of speciments which he has gathered from all parts of the United States, as well as from many foreign countries." In 1884, he received some valuable prehistoric relics from the kings of Sweden and Norway -- daggers, knives, all made of pure flint.

Not everybody can make that claim.

Reifel's biography lauds the museum as "one of the finest, not only in Indiana, but in the Middle West as well."

Dickerson was also dabbling in theories on the origins of the human species, so it's possible he was influenced by Charles Darwin.

Or was it the other way around?

"Artisans and Artifacts of Vanished Races" is Dickerson's claim to fame as an author.

As if that weren't enough, he was also the circulation manager and editor at those famous publications -- the Laurel Review and the Brookville Democrat. He produced pioneer-based content for a number of other Indiana newspapers of the time.

Jim Senefeld, who contributed great amounts of amazing information for the book Town Under the Lake, reveals quite a lot more about Dickerson.

He was a cousin to Sarah A. Hanna. Her blog item is HERE.

"According to Reifel, Dickerson was one of the leading archaeologists of Indiana. Yet we are still not sure where his fabulous museum was permanently displayed and located, or what happened to it upon his death. In 1908 during the centennial celebration of Brookville, an advertisement appeared in the Sept. 3 Democrat and said “This Museum of the Curious is now open to Brookville people and all other sections and communities who come to see something you may not ever see again, and will remain until September 10th, 1908, and no longer, as after that date they will be boxed and packed.” This display was at the Schneider Building, South Main Street."

Dickerson died in 1920 and was buried in Brier Cemetery.