Various maps of Fairfield Township during the 1800s show that the Mullin family owned rather large parcels of land.

Ranging from the north edge of the county into the Bath Springs area, to land adjoining the town on the west ... and in an area where S.R. 101 now runs, the Mullin footprint is substantial. 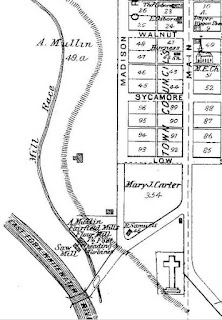 Most curious is from an 1882 plat map that shows "A. Mullin" ran a mill near the river. Presumably, that is Amos Mullin, who was the son of Lewis Mullin, who owned much land around Fairfield.

Most of the Mullins are buried in Bath Springs cemetery, just off old S.R. 101 in Union County. SEE BLOG ITEM HERE.

The Mullins were among a number of families who migrated to Harmony Township from New Jersey in the very early 1800s. The clan master was Mark Mullin, who owned land just south and east of Old Franklin.

I've run into a stump about the Mullin mill south of Fairfield. I can't find any other "A. Mullin" ... so I presume the business was run by Amos, who doesn't leave much legacy for the biographers to share.

What we do know about the mill business in those days comes partly from a book entitled "The Indiana Way," an Indiana University publication compiled by James H. Madison:

"The village store's only rival in the formation of public opinion was the neighborhood mill. Only rarely was the mill located at the village, the forces determining their location being entirely different."

So, yeah ... lucky we had a river, one that would ultimately conspire to doom the town.

"Early Indiana was rich in water power. There was not a county in the state but had several good mill streams. The water mills reached their climax in the decade of the 1850s. The farmers were producing enormous crops of wheat and corn and the railroads had not yet begun to carry them to the larger mills or elevators. This surplus grain was ground at the water mills, of which there were usually a dozen in each county."

I can't find evidence of many mills along the East Fork, though an 1870s map of Dunlapsville shows a mill along the river, but it also indicates that it was no longer being used.

Presumably there were mills along both forks of the river in Brookville and south. Flour milling was a profitable business along the Whitewater Canal at Metamora and Laurel.

At Fairfield, we have the "A. Mullin" operation.

Old maps show a mill race that had been cut on the east bank of the river, one that ran under the road to the mill just to the south of the bridge. Old photographs from the early 1900s show a bridge across the mill race.

Later, the mill race and the mill were completely wiped away. Speculation: A PIECE ON THE FAIRFIELD WEBSITE EXPLORES IT.

"The Indiana Way" shares more insight as to what might have transpired at the Mullin mill:

"These millers frequently added a saw mill, a tannery and a carding mill to their plant, rounding out their business by putting up a large store where all the neighborhood produce was bought and shipped by this pioneer merchant prince to New Orleans by flatboat."

"One can easily infer that the men who gathered at these industrial centers were far different from those who congregated at the village. If one was the forerunner of our literary and country clubs and other places of amusement and recreation, the other was the predecessor of the commercial clubs."

So what ended the run of prosperity for A. Mullin?

Flooding on the rivers did enormous damage to the infrastructure, though there's no evidence that occurred at Fairfield. It's conceivable that high water may have damaged the mill race.

Like everything else, the mills just wore out, the owners gave way to people who chose to do their commerce in different ways. The railroads moved goods farther and more efficiently.

Bigger just became better. The old grist mills were built for function only. They rarely qualified as "Taj Mahal" in scope.

One day, somebody filled in the Mullin mill race, tore down the bridge and wiped the mill off the map.