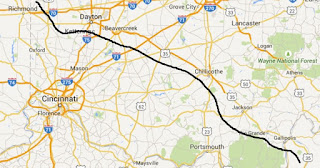 If you type the words "Kanawha Trace" into your search bar, you may come up with a series of links to some long-distance running clubs. Apparently the race in the hills of West Virginia is universally popular.

Around 215 years ago, nobody was in a rush. But the Kanawha Trace was busy enough.

It was a link that allowed Quakers and Dunkers to travel westward from Virginia across southern Ohio and, in some cases, to the Whitewater Valley.

It began in north central North Carolina, according to an essay on Ancestry.com, where the Moravian Brethren, Friends (or Quakers) and German Baptist Brethren (Dunkers, Church of the Brethren) had major settlements.

In fact, the origin was at a place called New Garden Friends Church in Greensboro. (It doesn't say which side of the building, however!)

At the trail's end, in Fountain City (once called Newport, Ind.) , a church with an identical name was eventually established. It's still there.

Before that, pioneers crossed Virginia toward the Ohio River, following a Shawnee path near the New (aka Kanawha) River. In those years, West Virginia was still a part of Virginia.

At a point where the New flowed into the Ohio at Gallipolis, the settlers crossed into Ohio.

The Ancestry.com document, written in 1998 by Merle C. Rummel, is based on information recorded by Argus Ogborn, a Quaker historian in Richmond. It is quite detailed in following the Kanawha Trace westward across Ohio.

What makes Kanawha interesting is that it isn't well known to students of the westward migration.

Roads going north through the Shenandoah Valley and into Pennsylvania and then west to Ohio or west into Kentucky through the Cumberland Gap and then north to Ohio were well known, but very much out of the way for the area of southwestern Virginia.

This appears to be a segment of society that just loved to migrate. Many of them were first- or second-generation immigrants from Europe, particularly Germany. They'd settled in Pennsylvania first, then moved downward into the Shenandoah Valley and Blue Ridge areas of Virginia.

By the middle of the 18th century, they had their eye on the land west of the Appalachian Mountains, which formed a barrier to easy travel, and Indian hostility prevented settlement in that direction. Later, British rule made settlement west of the mountains illegal.

After that, the Americans declared their independence.

By 1800, the Quakers were itchy to move again. So they followed the New River (which is actually very old) across what became West Virginia ... and a few of them ended up in the Whitewater Valley.

The trace was used until around 1812. It largely follows alongside the course of the New River to Gallia County, Ohio, and cuts through such places as Rio Grande and Chillicothe on its way across to Indiana.

A compelling 1981 novel "Follow the River," by Alexander Thom, explores this area in an historical adaptation of two women who must traverse the valley to escape their Indian captors.

THE DUNKERS
The German Baptist Brethren apparently did not endeavor to settle in the Whitewater Valley but farther south in Clark, Washington and Lawrence counties. A 1980 research document in the Indiana Magazine of History explores their history in some detail.

"As was the case with many religious groups, Brethren were quick to move west with the frontier following the American Revolution. Dunker families had crossed the Allegheny Mountains into Kentucky shortly before 1790. Ohio had organized congregations by 1802, Indiana by 1809, and Illinois by 1815."

Many of their congregations disappeared during the 1820s during what was known as a "Restoration" of primitive Christian principles. That eventually evolved into the Disciples of Christ movement.

The German Baptists are probably more closely aligned to the Mennonite Church.

The Brethren were distinguished from other religious groups by several important characteristics, perhaps the most significant of which was their form of baptism. The Brethren insisted on trine (i.e., thrice repeated) immersion, with face forward, in flowing water.

MORE ON THE DUNKERS