Oliver -- genius behind the plow

“I was classed with the fools who pursue the fallacy of perpetual motion,” James Oliver reportedly once said.

If that's the case, Oliver proved to have the last laugh. He's one of several industrial giants of the 19th century whose perseverance and forward thinking go somewhat unnoticed.

Well, only if you aren't paying attention.

Oliver was not unlike most early Hoosiers, having come from somewhere else. In his case, Scotland, where he was born in 1823.

He showed up in South Bend like many immigrants and set about learning the ironworking business in a hot foundry. And as the story is required to go, he invested in a little firm of his own and started making things with iron.

Those early days, plows were mostly wooden with iron blades. They frequently broke or got stuck in the mud.

By 1856, Oliver had stumbled onto a process of making a better iron plow, this time with a "chilled" effect that somehow turned molten metal into cooler plows, improving the temper of the metal and making it more durable.

A few years of toil eventually paid off and Oliver, in 1868, had perfected his process.

Why does that matter? Well, it does. 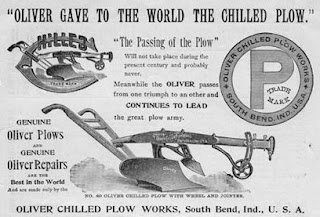 The development of the chilled plow was extremely important in a world that was largely still agricultural. By 1868, Oliver and his business associates had hooked up with wagonmaker Clement Studebaker, an industrial giant in his own right, to incorporate the South Bend Iron Works, makers of the Oliver Chilled Plow.

After that, the business began to grow rapidly.

By 1874, South Bend Iron Works turned exclusively to the manufacture of plows and other farm implements, opening sales and distribution centers from New York City to San Francisco, although chiefly in the Midwest and the South.

"By the turn of the century, Oliver employed more than 1,000 workers. In prosperous years, it could turn out as many as 300,000 plows, with specialized models for every purpose from breaking the thick prairie sod of Nebraska to cultivating the cotton fields of Alabama or the sugar plantations of Cuba. There was even a model for use in the steep hillside vineyards of the Rhineland, designed to throw the earth to the uphill side whichever direction the plow was moving."

Oliver farm equipment continued to appeal to farmers well into the middle of the 20th century but it's been merged into other companies in recent decades. It is part of AGCO at present.

Curiously, the success of the plow was also its worst enemy. Plowing praireland would inevitably prove tragic, leading to enormous amounts of soil erosion that helped produce the Dust Bowl of the 1930s.