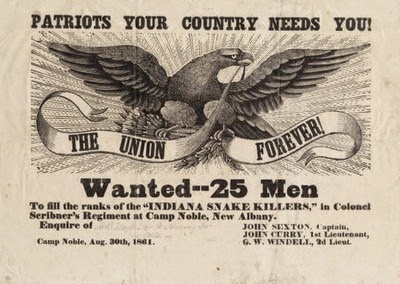 In any event, it was the most important episode in the history of Western civilization. I don't need to prove that; it's just a fact.

Hoosiers of all persuasions either took part or felt the impact of the great war, which was the bloodiest in the nation's history, since nearly all casualties were inflicted on Americans.

An 1882 Franklin County historical atlas describes the first days of the conflict, in 1861:

"When the assault upon Fort Sumter and the flag of our country was made, in April, 1861, the citizens of this county (Franklin) became at once united for the maintenance of the national honor."

Not long after that, the report says, a company of Franklin Guards was formed in Brookville, "probably in remembrance of the old Mexican war company."

The report provides the names of those who joined, and one could assume that a few were from the Fairfield area.

The Democrat, a Brookville newspaper, wrote: "The war pervades the entire community, and nothing else is talked of. Our readers must excuse us if we do not give all that transpires."

Indiana, as a member of the Union, was expected to send 75,000 volunteers to service, the report claims. Precisely how one promises volunteers depends on whether the alternative is to be told to join.

Brig. Gen. Thomas Morris was in charge of the Indiana outfit. The downside was that the Franklin Guards evidently organized too late to be called for the first round of fighting, "but just in time to be absorbed by the organization of the six State regiments."

The process here is somewhat confusing, but the apparent belief that they'd serve for a year was offset by the reality that the army actually meant they'd serve for three years. Um ... changing the rules, it would seem.

"The Franklin Guards were divided over the subject of enlisting in the three years of service. The company was assigned to the Thirteenth Regiment, and lettered "C" with the original officers, and all those men who were willing to accept the three years' enlistment. The remainder were assigned to the Sixteenth Regiment, and served their period of enlistment (one year) with that corps. Many of these men re-enlisted in other regiments later during the war."

As time went on, zeal for the Union cause scarcely wavered but it faced challenges that were frightening at the time and unsettling to read, a full 150 years later.

Being at war is never a pleasant experience.

And the war did come to Indiana.

"Arbitrary Arrests For Differences Of Opinion" would be a headline in an 1862 newspaper.