Plenty has been written about Lew Wallace, the soldier, author, son of a prominent political leader.

For our purposes covering the 200 years of the history of Fairfield, Wallace's life is a very long stretch. That doesn't make him any less interesting. His role in the Civil War is the stuff of movies ... which, by the way, Wallace actually inspired.

A bit about Wallace's early life will get us to the good parts where he and Gen. U.S. Grant spent most of their lives bickering.

The Wallaces came to Brookville in 1817, about 10 years before Lewis was born. His father, David, would soon become governor and make his mark on the state by crafting a plan to bring the state out of the woods and into the future. This all related to the environment surrounding the upstart state capital at Indianapolis. David Wallace said Indiana needed roads.

David Wallace's life is interesting in its own right, but he's not particularly important to our blog, so we will shorten his story to say that he had studied at West Point, married Esther Test, of a prominent family ... and from there, he would make his mark on Indiana history.

At some point, the Wallace clan moved to the town of Covington and, from there, Lewis got an early education in Crawfordsville before ending up in Centerville being supervised by one of his aunts in the Test family.

According to a 1941 article in the Indiana Magazine of History by Irving McKee, Lew Wallace was somewhat of a delinquent.

Writes McKee: "The preparatory department of Wabash, Crawfordsville's new Presbyterian college, as well as the county seminary there, were uncongenial to the tow-headed Lewis; in each the inevitable bullying master ruled, and, fleeing each, the truant learned more of woods and fields than of grammar, arithmetic, and Latin."

As the state began swimming in red ink over its internal improvements, which included the canal system, young Lewis began to explore new diversions while his father struggled in vain to rescue his flagging political career.

In Centerville, a man named Professor Samuel K. Hoshour was credited with turning Lewis's life around, introducing him to literature and writing.

"Upon occasion he still received a flogging, but the pain was ameliorated by discrimination and sound justice. Moreover Hoshour revealed the splendors of John Quincy Adams's 'Lectures on Rhetoric and Oratory,' 'The Spectator,' 'The Vicar of Wakefield,' and the verses in St. Matthew.

That Scripture is said to be the genesis of Wallace's most important work.

The Centerville episode a success, our hero returned to Indianapolis.

Writes McKee: "Back at the Indianapolis seminary after a year, Lewis suddenly found he could more than hold his own there. On Friday evenings the classroom was the scene of the Union Literary Society's meetings, throbbing with debates, recitations, readings and parliamentary exercises. With various young ladies for inspiration, lyrics flowed freely from young Wallace's pen and were not only read to the members of the Society but, occasionally, published in a friendly newspaper."

In effect, Lew Wallace was a dreamer, a romantic, a literary adventurer and a man of poetry and fantasy. He apparently had an enormous gift for writing at a young age. His fascination for the battle at the Alamo in the Mexican War of 1846 inspired him to pursue a military career.

He had enlisted in the Mexican War, read some books on tactics, and maintained an interest in volunteer military organizations, so upon the outbreak of the Civil War he was appointed adjutant general of Indiana.

He was in charge of raising the state's first quota of regiments and was given command of the Eleventh Indiana Volunteers. A citizen-soldier in the American tradition, Wallace learned most of his military lessons in the field.

In his autobiography, Wallace writes that he knew in advance that the rebellion would be not only a long and bitter conflict, but that it would also be crowded with "opportunities for distinction not in the least inconsistent with patriotism."

Wallace would come full-face with his own history at the Civil War battle of Shiloh.

After that, he wrote a book about Ben-somebody and really did become famous.

Trivia:
Zerelda Sanders married David Wallace. She was the sister of Jemima Sanders. (these are not fake names) ... and Jemima was married to Richard J. Gatling, whose invention -- the Gatling gun -- was a feared weapon during the Civil War and into the 20th century. 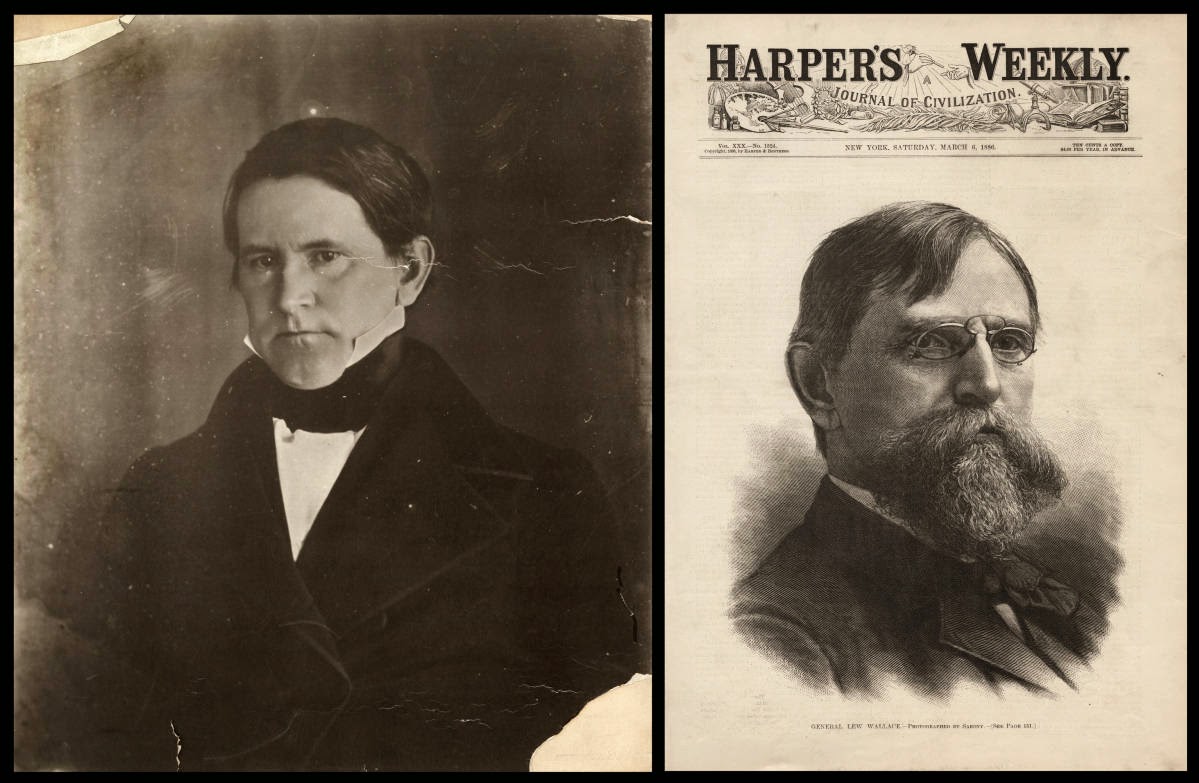