Gen. Lew Wallace, born in Brookville, educated in Indiana, is best known for his blockbuster novel, Ben Hur: A Tale of the Christ.

His military exploits are no less compelling. Without enumerating his successes and failures beyond his one egregious mistake, Wallace could be categorized thus by the Indiana History Magazine, published by Indiana University:

"Wallace is less remembered as one of the highest ranking Union generals during the Civil War. A romantic even as a soldier, Wallace hungered for military glory and always longed for a command assignment where he might experience the thrill of battle while promoting his military renown."

Wallace's zeal and efficiency in the early days of the Civil War merited him a promotion to major general.

So, what went wrong?

Wallace was basically self-trained in military strategy. He came from affluence, and his political clout afforded him inroads into the hierarchy.

Wallace and Maj. Gen. U.S. Grant had apparently forged a somewhat tenuous friendship and after a decisive battle in February, 1862, at Fort Donelson, Wallace gained enough favor to be given charge of his own division. 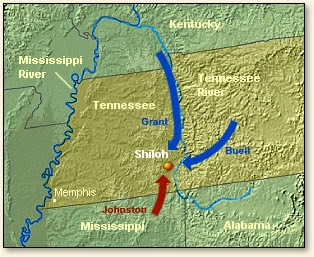 Wallace didn't exactly "general" the way Grant liked it but he forgave the Hoosier because he was producing positive results.

As April arrived, Grant was jockeying for position at a place in Tennessee called Pittsburg Landing (aka Shiloh). Wallace was essentially told to wait for further orders. Wallace wasn't happy about that.

The history at that point becomes more cloudy.

"Principal actors in the subsequent events disagree about times, the content of verbal orders, individual demeanors, and motives. No matter how one weighs the undocumented recollections and virulent recriminations, the central problem remains that Wallace did not reach the Union Army at Pittsburg Landing until after nightfall on April 6."

Vague orders mixed with military arrogance created a bubbling stew after that. Wallace was never clear if he'd done the right thing and Grant was apparently in no mood to discuss it.

At that time, Grant was still not in charge of all Union forces. That role was held by Henry Halleck, who assigned Wallace to Cincinnati where he'd later be revered for defending the city.

"Despite his dubious military credentials and his well-developed sense of self-importance, Wallace proved to be the ideal choice for this critical assignment. The unusual situation called for an energetic commander with a flair for the dramatic. Wallace's failings as a field commander proved harmless in this case; indeed, his hyperactive approach to battle may have saved lives on both sides of the Cincinnati trenches."

But Grant evidently continued to seethe, and as time went on Wallace's standing in the Union military system eroded.

He pleaded with Grant to have the record set straight at Shiloh. Grant consistently refused to acknowledge that mistakes had been made. As the years passed, Grant began to soften his criticism of Wallace but the Hoosier never got the satisfaction he needed -- an admission that he'd done no wrong at Shiloh.

Wallace was re-assigned to commission work and would play an important part in war crimes trials after the rebellion ended, in part because of his knowledge of the atrocities committed at the infamous war prison in Andersonville, Georgia.

After Wallace was assigned to duties along the Mexican border, he conjured up a scheme that would have helped the Mexicans overthrow the French, who had invaded the country in 1861. Grant found the strategy compelling but never actually acted on Wallace's plan. Instead, Grant found other resources and forced the French out of Mexico in 1865.

Wallace was later named by President Rutherford B. Hayes as governor of New Mexico territory, still awaiting word from Grant that all was forgiven and corrected about Shiloh. His attempts to meet Grant in person were ignored and his book on military infantry tactics was dismissed by Grant as having little merit. He even attempted to land a position in the diplomatic corps; Grant chose somebody else.

Wallace just couldn't get past Shiloh.

By the 1870s, Wallace would begin his writing career. The Fair God was published in 1873.

Wallace's claim to fame in New Mexico was his role in ending the reign of terror by William Bonney, Billy the Kid.

It was in New Mexico that he wrote the immensely popular Ben-Hur: A Tale of the Christ.

After Wallace was assigned to the ambassadorship to Turkey under President James Garfield, the debate over Shiloh continued to rage in periodic academic reports and essays, but it never ended.

So why did Grant act as he did toward Wallace?

"In the immediate aftermath of the battle, Northern newspapers vilified Grant for his performance during the battle. Reporters, many far from the battle, spread the story that Grant had been drunk, falsely alleging that this had resulted in many of his men being bayoneted in their tents because of a lack of defensive preparedness."

Grant had to blame somebody.

"The terrible reflections in your indorsement on my official report of the battle, and elsewhere, go to the world wholly unqualified. It is not possible to exaggerate the misfortune thus entailed upon me."

Nearly 25,000 casualties were documented at Shiloh.