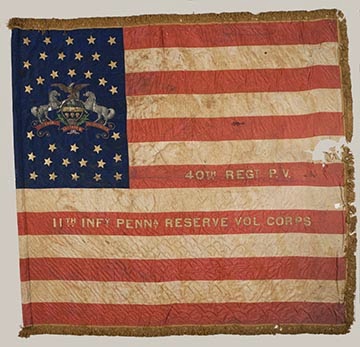 Despite Indiana's commitment to the Union cause in the Civil War, relative to the number of men who were sent to fight, there was considerable opposition.

As peculiar as it sounds today, a not-so-silent minority of Hoosiers actually advocated seceding and joining the Confederate cause, though most evidence suggests this was contingent upon Kentucky's choice on whether to remain in the Union or bolt for the Southern cause. As it turned out, Kentucky saw its fortune better served in the North.

Jeff Biggers, in writing The United States of Appalachia, uncovers some interesting sidelights to the anti-war point of view.

"With Louisiana out of the Union, Indiana lost one of its most important markets, New Orleans. And the possibility that all the slave states would leave the Union (Kentucky was one) marked the Ohio River as the potential new boundary between the two new nations, nations that seemed potentially on the verge of war."

So, Biggers concludes, the thinking in Indiana was to hedge one's bets. The election of Abraham Lincoln had fueled the argument. Lincoln was pro-union, anti-slavery. His politics did not appeal to the Deep South.

"Some in Indiana blustered that if Kentucky were to secede, so should Indiana. an early 1861 Union meeting in Perry County (on the Ohio River) resolved: 'That if no concession and compromises can be obtained, and a disunion shall be unfortunately made between the Northern and Southern states, the commercial, manufacturing and agricultural interests of this country require us to say that we cannot consent that the Ohio river shall be the boundary line of contending nations, and we earnestly desire that if a line is to be drawn between the North and the South, that line shall be found north of us'."

Kentucky's decision to remain in the Union despite permitting slavery dimmed the talk for secession in Indiana.

But anti-war talk was common and though rarely violent, was distributed across the state.

A nefarious group known as the Knights of the Golden Circle contributed greatly to anti-war sentiment in Indiana. The organization had existed long before the rebellion, committed to spreading slavery across most of Central America. The group was fueled by men of wealth in the South.

Logan Esarey, in his history of Indiana from 1918, says: "The organization and ramifications of this mysterious society were pretty definitely proven by the governor and the federal secret service. The society began to manifest itself ... in 1862. For its inspiration, it seemed to go back to the ancient dream of making a second Roman republic around a second Mediterranean sea."

In a phrase, the Knights envisioned the country surrounding the Gulf of Mexico as one vast empire based on cotton and slavery. It's difficult to evaluate how many believed this fantasy, but the group's designs were decidedly NOT in favor of a Union anti-slavery policy.

One can assume that the Knights of the Golden Cross, under various names, morphed into what might be recognized as the Ku Klux Klan. The Knights actually endured well into the 20th century and were identified as having had political relations with the German Nationalist Party, led by Adolf Hitler.

In Indiana, the secretive group operated under various names, such as Sons of Liberty or "Peace Organizations" ... anything to deflect its anti-Union point of view.

These men opposed the war on violent terms, primarily over the slavery issue. As the South showed early military strength, the Knights grew in number. For awhile, their political clout was substantial, though not as much in Indiana as in the border states. One estimate suggests as many as 50,000 members in Indiana, though Esarey concludes that the vast number were not aware that the society's aims were treasonous.

And virtually everything that didn't support the Union cause was considered treason.

Indiana's chief Knight was Harrison H. Dodd of Indianapolis. The leading members were a diverse group from all corners of the state.

The Knights reportedly had recruited a sizable rebel militia, though it's unclear how effective it would have been. At national meetings, Esarey says "the plan was prepared to overturn the state governments of Ohio, Indiana, Illinois and Missouri, release the confederate prisoners at Columbus, Indianapolis, Chicago and Rock Island, seize the governments and launch the famous Northwestern Confederacy in close alliance and sympathy with its sister of the South."

The aims and objectives after that turn a little muddier but as the South began losing the war after the battle of Gettysburg, much enthusiasm for the Confederate cause began to wane, and support from the South itself began to dwindle.

A war of terror appears to have developed but as shipments of arms to the Knights were increasingly intercepted, friction among the leadership inevitably occurred.

Eventually, its leaders were arrested, convicted and sentenced, only to be pardoned later by President Andrew Johnson, who succeeded Lincoln after the assassination.

One report says of the Knights of the Golden Circle:

"Nothing can be said in favor of it. As a declaration of principles, it was 50 years too late; as an economic organization, it was brute force against right, the highwayman's creed on which slavery and feudalism had been tried and failed."

TRAITORS TO THE CAUSE