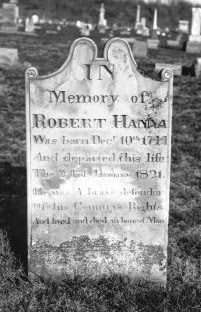 We have learned that Robert (Robin) Hanna, one of the first settlers in the Whitewater Valley, was also a veteran of the War of Independence.

Also known as the American Revolution.

Hanna, who came to Indiana in 1803 from Laurens County, S.C., was one of several Revolutionary soldiers to be buried in Franklin County. Hanna's grave is in Sims-Brier Cemetery at New Fairfield.

A book published in South Carolina includes brief biographies of the men who were called Patriots during the rebellion. Of Hanna, it says:

Robert Hanna was in many skirmishes and in the battles at Kings Mountain, Cowpens, Guilford Courthouse, and Eutaw Springs. According to family legend, the battle of Cowpens was fought on the plantation of his son, Joseph, who married Sarah Adair.

The use of the word "plantation" probably ought not be misconstrued. It could easily have referred to a "farm." The accepted description of plantation is less genteel. It is easy to assume that the Hannas were not poor.

In truth, Robin Hanna's desire to fight on the American side in the Revolution was far from automatic.

The bulk of the resistance to the British crown lay in the North, in New England. To the South, the agrarian nature of society was less inclined to want to throw off the yoke of colonial rule. British loyalists were quite common in South Carolina. To defy that was risky. Southern economy depended heavily on trade with England. At that time, France was less a market than a potential ally.

As well, the Brits were inclined to favor war atrocity as a way of coercing the public into submission. They had also enlisted disgruntled Cherokee Indians to do some of their frontier bidding in the expansive colonies.

Jeff Biggers, who wrote "The United States of Appalachia," says that at least one faction of the colonial South advocated making a deal with the British ... agreeing to end the rebellion in exchange for Georgia and the Carolinas, which would remain part of the United Kingdom.

That was not an especially popular point of view, but it showed that not everyone in the colonies favored independence, at least not on the American terms.

In "House of Hanna," the author, Sarah A. Hanna, Robin Hanna's granddaughter, projects a conversation that could have been held. In it, Sarah relates a story that her grandfather would have told about having captured a sword from the British garrison commander Sir Banastre Tarleton, "when Tarleton was raiding and devastating our homes that I was going home to see my family, and I was skulking along rapidly to clear an open country that lay around me for about a mile. I had nearly reached the center of the open when suddenly I heard the sound of distant clattering of horses' feet."

Robin goes on to explain how he managed evasive tactics in the face of a Royalist battalion. Tarleton, meanwhile, had seen a deer and had tried unsuccessfully to kill it with three shots.

"I thought about his three empty pistols and I congratuated myself on my own well loaded ones, and as I watched his approach, I drew my feet up under me in such a way that I could jump to a standing position in a moment."

"Will you surrender?" he told Tarleton, who realized his pistols were empty. Tarleton, in a tough spot, agreed to relinquish his sword since Robin, who had captured a prisoner, had no way of truly confining him with his own camp several miles away.

Robin agreed to not shoot Tarleton in the back as he rode away.

He ended up with a sword as his trophy.

As an aside, the British depended somewhat on loyalist regiments in the war in the Carolinas. For the most part, the loyalists, sometimes known as Tories, were nothing more than cannon fodder. They were often ill-trained, badly equipped and generally disregarded as illiterate rabble by the sophisticated British military commanders. In most skirmishes, the colonial soldiers defeated them easily, which helped hasten the South's shift to support of the American cause.

A BIT ABOUT BANASTRE