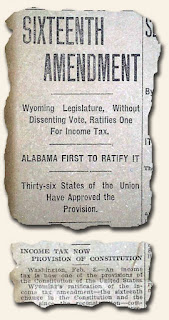 The adoption of the federal income tax in 1913 should have been a dead giveaway that prohibition of alcohol was on the horizon, according to essayists of the day.

Progressives in the 1800s, led primarily by the Golden Orator, the crusader of all crusaders, William Jennings Bryan, had lobbied for the abolition of liquor in a number of formats. Until 1913, the government's taxation process was irregular. Government didn't actually DO much in those days, and it derived a large part of its income from federal excise taxes on booze.

A booze tax went back to the days of the Whiskey Rebellion, in the colonial times. Even George (I'm on the dollar bill) Washington helped secure that tax.

But a tax on income? The idea wasn't original.

Prohibitionists, led by the voices of Bryan and other faith-based progressives who believed in a stronger federal government, realized that if liquor were no longer being sold, the tax money it yielded would dry up and blow away.

Support for a federal income tax came generally from states who figured to suffer less from it ... that being places where income was typically lower. Those were also states where prohibition of liquor was more strongly supported.

But it was a certainty that something to replace a federal liquor excise tax would be needed after prohibition occurred. The key word is "after" in the placement of details.

The movement toward abolition of consumptive alcohol was apparently a certainty and it would simply be a matter of time before it was the law of the land.

The insertion of the world war slowed the process but not the fervor. The income tax was ratified by the states, and the industrial regions were hardest hit, initially.

Actually, there had been other income taxes levied on Americans, one of them during the Civil War, but the law was repealed when it was no longer deemed necessary.

Other income tax laws usually fell victim to the Supreme Court, one that would have tacked an income tax onto a tariff bill.

According to government studies of the 16th Amendment that ratified the income tax in 1913, the whole of the process was something that had gone awry.

The progressive Democrats were lobbying for new changes in a tariff law and the conservatives weren't in favor of that. So the conservatives in 1909 promoted a constitutional amendment to enact an income tax. They assumed the amendment would fail and derail the tax, once and for all.

The vote on the amendment went through the usual channels and was somehow approved by the states four years later.

The income tax law initially had virtually no impact on most Americans, who earned too little to even bother with it. As time dribbled on, that would change radically as inflationary wages began to creep into the system.

But the tax was constitutionally in place and allowed the progressive Prohibition forces to redouble their efforts to have liquor taken off the menu. After all, the government now had a legitimate way of raising revenue even without a booze tax.

The impact of the tax, who supported it and why, as well as its ups and downs, all related in ways that eventually greased the path toward social reform. The end of World War I modified the attitudes of millions of Americans who suddenly saw the United States as the ascendant nation on the planet.

Doing the "right thing" was an easy sell. America had prevailed in global conflict.

"For at least two elements of the Prohibition army the struggle for an income tax was an appealing cause, irrespective of the alcohol question. For the progressives, it was an obvious way to enhance the power and effectiveness of government. For many of the racially motivated prohibitionists of the South, whose populist anger was monochromatic but nonetheless real, it was a way to avenge Reconstruction by striking back at the economic and political imperialists of the North."

"And to those in the dry movement who understood political and governmental reality, imposition of an income tax was also an absolutely necessary step if they were going to break the federal addiction to the alcohol excise tax."

It would be another 7 years before the 18th Amendment was ratified.

By the way, between the 16th and 18th Amendments ... the 17th, that modified the Constitution in 1913 to allow for the direct election of U.S. senators. Prior to that, senators had been chosen by state legislatures.