Indiana and the Klan -- Part 1 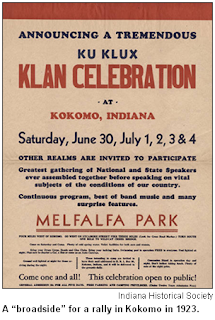 The rise of the Ku Klux Klan in Indiana in the early 1920s would seem, on first glance, to be something out of a made-up story. After all, the Klan was no longer even functional. It had existed in the years after the Civil War to intimidate black people.

As time went on, the organization ceased to exist in any significant numbers. It was dead in the water, or so we thought.

But a series of events conspired to re-fuel the Klan's message, much of which dealt with the end of the first World War. It was called a renewed pledge toward "Americanism" that had been practical and valuable in sustaining U.S. patriotism in what was deemed the "war to end all wars."

The government even passed sedition laws forbidding speech condemning the war, clearly unconstitutional but seldom challenged. When the war ended, the fever subsided.

But the Klan, in the South, saw a way of re-energizing, sensing a way of building a power base for zealots.

To make the argument work, enemies were necessary. So ... well, foreigners and Catholics were easy targets. If you spoke in a foreign accent, you were probably not 100 percent American. And the Catholics were run by the Pope, who was probably going to take over the country and run it from the Vatican.

That's enough. Just heap on the patriotism and the Christian Protestant (White) topping, and the membership began to grow.

How that gets to Indiana is a bit more complicated, but along the way, a man named David Curtiss (D.C.) Stephenson heard the message. He was a liar, a con man, a drunk, a womanizer, a thief ... and he had a real good idea how to profit from things that were happening.

So he landed in Evansville in 1919 or so, got involved in the lucrative coal business and proceeded to convince people that he had clout with top-level people. He was good at talking. He wanted political power, since he had come from poverty and was angry that the poor were mistreated so by government.

The Klan, which was trying to extend its reach into the Northern states, happened to learn about the interesting stories Stephenson was telling, and recruited him to help build a "Klaven" in southwestern Indiana.

A long series of peculiar events conspired to give Stephenson a larger power base than he probably deserved but the end result was that the Klan found fertile soil in Evansville. From there, Stephenson worked his unusual magic and by 1921, he had made major inroads into Klan growth in Indiana.

"What made Stephenson think he could sell the Klan in Indianapolis? Was there anything unique about Indiana in the 1920s that made the state ripe for the phenomenal impact of the Klan? Stephenson might have been just as successful in some other state. But the fact remains that he found his greatest success in Indiana."

Reasons were easy to identify on even a cursory glance.

"The natural disposition of so many Hoosiers of that period to be joiners contributed to Stephenson's success.  Hoosiers in the 1920s were eager to become part of some organization, any organization. The Klan satisfied that need, and Stephenson simply happened to be in the right place at the right time."

Indiana was rural, and its nature was more traditional, Protestant, inclined to distrust Catholics and foreigners. Why?

As a Midwestern state, the presence of foreigners and Jews made them stand out, therefore being suspect. The "colored" component was easy to identify, though blacks were insignificant in numbers in Indiana until the mid-20s when they began to come north to work in factories that had begun recovering from the slowdown just after the war. Rural poverty in the South was the key reason.

As blacks began to arrive in larger numbers, the Klan was able to play on that aspect of its message. It was easy to inspire whites to fear the influx of so many "niggers and wetbacks."

"The Knights were successful in recruiting members in Indiana because ithey found fertile soil in this rurally-oriented, native American (white, Protestant) stronghold ... it found ready acceptance among Hoosiers who were confused by change and angry over what they felt to be a breakdown in authority."

In any case, the Klan's reach stretched into nearly every corner of the state. In another entry, we will learn why it mattered to Franklin County.

Stephenson, for his part, remains a fascinating character in state history, even past his conviction for murder that eventually was the undoing of the Klan in Indiana.

"Stevenson had joined the Klan primarily to organize a political power base. His first connection with the Klan stemmed from his efforts to carve himself a niche in local politics. He did not join the Klan because it was the Klan. He Joined because it promised him a way to build his own power group. Had the Rotary, the Elks, the Moose or the Odd Fellows offered him a similar chance, he probably would never have bothered to join the Klan. It was just the right organization for him at the right time."

To be sure, Stephenson was a Socialist early on, then a Democrat, then a Republican. Political parties were just names to him and to the Klan during its reign. They supported candidates who agreed with them or, at worst, didn't disagree. Party labels meant nothing. "Americanism" fueled their machinery.

Klan operated on a national agenda, with some of its leaders in Atlanta primed to become THE source of political power in America, though an actual Klan Party was never generally accepted.

Lutholtz's book is chock full of anecdotes, chilling stories and details. I will touch on some of it, with the caveat that an opposing point of view is probably difficult to locate.

It is also known that the Klan operated openly in Ohio, Michigan and Illinois without the apparent control over government that it wielded in Indiana.

In 1925 Stephenson was tried and convicted of second-degree murder in a notorious abduction, rape, and murder of Madge Oberholtzer, a state education official. His trial, conviction and imprisonment ended the portrayal of Klan leaders as law abiding.

Denied a pardon by Gov. Ed Jackson, in 1927 he started talking with reporters of the Indianapolis Times and released a list of elected and other officials in the pay of the Klan. This led to a wave of indictments in Indiana, more national scandal, the rapid loss of tens of thousands of members, and the end of the second wave of Klan activity in the late 1920s.

Stephenson was eventually paroled in 1950 from state prison in Michigan City, violated its terms, went back to prison, was paroled again in 1956 and eventually moved to Jonesboro, Tenn., where he died in 1966.