The enormity of the global conflict known as World War I has been documented and updated. Despite that, it's awe-inspiring stuff. It will also be difficult to separate the war and its consequences from some other apparently unrelated history of the time just after the 20th century began.

Literally thousands of men could be killed in a single battle that could rage for days, even weeks. At times, both sides would declare a truce so that the dead men and horses could be buried.

The sheer magnitude of the war was something those who recorded its first history could scarcely fathom, but they believed that the world had learned its lesson. It was, according to the British upon their decision to join the fighting: We must win the war to end all wars.

About thirty percent of Europe's male population was killed or wounded. Many others simply disappeared. It seemed in aftermath that there was nobody left to fight a war. Perhaps the plan indeed had worked.

America's involvement was comparatively small, a little over a year. "Over There" was the theme. The U.S. would send troops to Europe, kick some German ass and come home, just like it was planned. 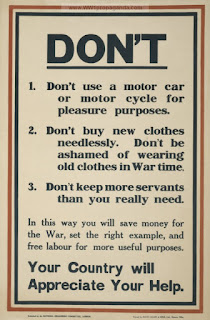 The whole of the war had started on that premise, with the leaders of the reigning royal houses all convinced that they would just go off and have a war, the generals would excel and at the end, they would have a grand gala celebration.

Virgil Davis, in his 1958 study of the war as it affected Franklin County:

"In World War I, 24 boys from Franklin County gave their lives in the service of their country. Of these, several died in the hospitals during the great influenza epidemic of 1918. This epidemic resembled the cholora epidemic of 1849, since it struck not only the soldiers but the home front."

"The first boy to lose his life from the county was Bernard Hurst of Oldenburg."

Hurst is remembered for having the Brookville American Legion Post 77 named in his honor.

Along the way, various relief agencies were activated, and included dozens of local volunteers who led war bond rallies. The voluntary rationing of fuel and leather products was a national affair.

There is no intent here to evaluate the causes or effects of the war, other than to acknowledge it as an integral part of the time.

We know what came afterward, and generally why, though much of what we think we understand about the post-war world is somewhat shallow and short-sighted.

Another history, a 1925 Atlas (referenced in an earlier entry) has a somewhat somber entry that's worth adding. It was written by a soldier named Albert Eldon Sellers, a Franklin County man who was serving in the war in Europe in 1918.

He called me "Kamerad"
That whining Hun with bloody hands,
I ought to shoot him where he stands,
You woman-raper, murderer, brute!
Aha -- you're too dam low to shoot.

Danny was me pal.
We hiked together through the Texas sand,
He took me back when I could hardly stand
The last long mile. He nursed me when I fell
Beneath the Caisson and cracked me shell.
Danny shared with me
His last thin dime -- his pack of cigarettes,
He's gone West now, and went with no regrets,
You Hun! You killed me comrade!

You killed me Danny,
Danny me pal, me bunkie all the way
From the Border to the trenches, till the day
You got him and shot him and he fell.
You're no "Kamerad" o'mine, you imp o'hell!
Don't call me "Kamerad."
You're dirty to the core!
Your hands drip blood. Your heart is black and more!
And yet you call me "Kamerad."

DEDICATED TO DANNY DUNCAN WHO DIED IN FRANCE

WORLD WAR I -- AN IU PUBLICATION


On a more personal level, one of my grandfather's brothers, Jacob Kunkel, was killed in the war. I've snipped a memorial insertion from the 1925 Atlas that explains.