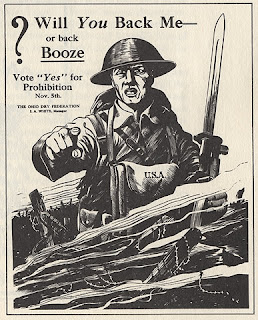 Earlier blog items explored some of the nuances surrounding the consumption of alcohol in rural Indiana.

We learned that corn, as a farm product, served many uses. It was currency, as was the whiskey it helped produce. Whiskey was a part of America's culture in the 19th century. It was used to obtain land from the native tribes, who somehow found liquor to be their undoing.

But whiskey consumption and its resultant abuse was not limited to Indiana and nearby Ohio. (Ohio is nearby for those who don't know where Indiana is located.)

In fact, an area east of Cincinnati is perhaps one of the most logical focal points of the turning point that changed America from a nation of alcohol abusers to what might have been the most bizarre social experiment in Western cultural history:

There are interesting links to Prohibition that begin much earlier than 1920, when the 18th Amendment (Volstead Act) was ratified by the states. Not surprisingly, those links lead us back to immigration, the first World War, the Ku Klux Klan and other spellbinding phenomena.

The right of women to vote would be part of that.

And to Ida Husted Harper, who was a pivotal figure in that fight. Husted Harper, born in Fairfield, is directly linked to the temperance movement, due to her association with women who were strident social reformers. Her essays dabbled in the topic, at least. Blog items about Husted Harper can be found in the index on the right.

Daniel Okrent, who wrote a comprehensive novel, "Last Call: The Rise and Fall of Prohibition," entertains some fascinating theories about how Prohibition came about and what emerged from it.

Naturally, Okrent doesn't do much exploration of how whiskey consumption and prohibition affected Fairfield and the Whitewater valley, but various 19th century histories confirm that the production and sale of alcohol did occur in Fairfield, though there was no tavern in the town or township in the second half of the 20th century.

If somebody was making booze in the hills, nobody mentioned it. 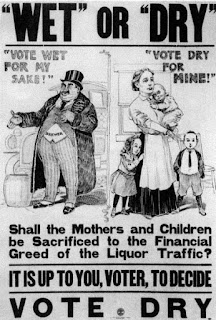 Okrent offers this theory: Temperance movements had come and gone over the last quarter of the 19th century, and most opposition came, oddly, from the "ranks" of immigrants -- namely the Irish Catholics and German Lutherans. I can't find a specific reason why those groups, including the Italians and Eastern European Slavs, fought against prohibition.

One would assume that their native cultures were more closely connected to wine consumption. The Irish came to America with the reputation of misusing alcohol. The stereotype was apparently somewhat accurate, if their politics on the topic mattered. Germanic peoples have always been famous for their love of beer.

In any event, it isn't difficult to draw lines among the dots with relation to the rise of right-wing Protestant movements. That would include the second incarnation of the Ku Klux Klan, though this blog item is not about the Klan.

Instead, it is about the temperance movement that Okrent generally pins to an event in Hillsboro, Ohio, in the winter of 1874. Hillsboro, about 50 miles east of Cincinnati, had been visited by a traveling moralist named Dioclesian Lewis, who was selling a book and a few social reform ideas.

Lewis met with a group of Hillsboro women who had evidently wearied of the sloven drunkenness of their husbands ... and from this meeting emerged an unusual voice.

Eliza Thompson, a housewife, mother of 8, devout Methodist ... and a woman who found herself being  the focal point of a temperance crusade that would eventually include Susan B. Anthony and Elizabeth Cady Stanton, whose legacies would be more known for women's suffrage than prohibition.

In any case, Okrent writes: "The rise of the suffrage movement was a direct consequence of the widespread Prohibition sentiment." Even Ida Husted Harper had written on that subject, claiming that the right for women to vote was less important than ending the scourge of drunkenness.

Husted Harper would later modify that point of view.

Some historians have concluded that had the drinking problem been resolved in the 19th century, women would have been content with that -- and that the suffrage issue would not have emerged until much later, if at all.

But the temperance movement gained in strength through the efforts of conservative Protestant churches and elected officials who profited from that support. As World War I approached, the battle over booze would be set aside, but it would come four-square into the nation's moral conscience after 1919.

The Volstead Act "changed the way we live, and it fundamentally redefined the role of the federal government."

The push for Prohibition had been years in the making. One unrelated step led to another, beginning in 1913 when the government implemented a way of collecting income tax. After that, the money one earned became money the government wanted.

Oddly, the people who supported states rights were also those who were strongly in support of Prohibition, at least in conversation.

"In 1920 could anyone have believed the 18th Amendment ostensibily addressing the single subject of intoxicating beverage, would set off an avalanche of change in areas as diverse as international trade, speedboat design, tourism practices, soft-drink marketing, and the English language itself? Or that it would provoke the establishment of the first nationwide crime syndicate, the idea of home dinner parties, the deep engagement of women in political issues other than suffrage, and the creation of Las Vegas?

If there was a still up in the hills near Brookville ... ah, history.