The day the tap was turned off was the day Billy Sunday became the most respected man in America.

Billy had won the good fight and he was not about to let anybody forget it.

Sunday was one of the most charismatic figures of the entire era that had begun in earnest in 1874. Billy was a big-league baseball player in the 1880s and was probably considered a little below average in talent. He was, however, a fast runner and stole a lot of bases. He also made about $3,500 a year to play baseball, which was far and excess of what the average baseball fan earned.

Along the way, he found his calling, hung up his spikes and sent about preaching about the evils of strong drink.

Sunday claimed that too many players of his time, free to roam the country without direction, had turned to booze, which ruined their careers and lives. He decided to step up, fight back. So he became a preacher, almost as an epiphany.

According to Daniel Okrent, in a comprehensive book on Prohibition called "Last Call," Sunday came upon his decision on the spur of the moment.

"Sunday had always been religious but in 1888, while he sat on a Chicago curbstone with some other players, hymns from a nearby mission caught his ear and his heart. Turning to his teammates, he said he really didn't want another drink and then went across the street and found shelter in the stainless calm of the mission."

He spent 40 years in the pulpit, addressing an estimated 100 million people. That's probably an exaggeration.

When Prohibition became law in January, 1920, Sunday allegedly addressed a throng of 10,000 in a church in Virginia:

"The reign of tears is over," he told the Norfolk flock. "The slums will someday be only a memory. We will turn our prisons into factories and our jails into storehouses and corn cribs. Men will walk upright now, women will smile, and the children will laugh. Hell will forever be for rent."

No sooner had the Volstead Act become law than the pro-booze forces began working to repeal it. In the meantime, lawlessness was the word in Chicago, the "town that Billy Sunday could not shut down," according to Frank Sinatra.

A pro-liquor Senator from Missouri named James A. Reed, a Democrat, generously called Volstead "a burner of witches" and "executioners." Reed was not the most genteel of spokesmen for the anti-Prohibition cause, which set the movement back from time to time. Eventually, however, more cautious political figures joined the fray and, little by little, they managed to erode the Prohibitionist lobby. But it would take another decade.

Bootlegging, the Prohibitionists said, was largely the domain of the immigrant factions in the country, which played nicely into the xenophobia that had allowed the Ku Klux Klan to emerge in Indiana. Bootlegging was a business that had no rules. It was a difficult business to quantify.

Xenophobia was a driving force in most social movements of the 1920s, and a number of immigrant "reforms" were shoved through Congress, feeding off a fear of aliens.

Inevitably, what doomed the "drys" was the sad fact that most of them were "wet" part of the time. And they got cocky. 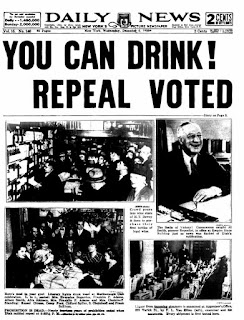 Writes Okrent: "When the WCTU, confident of their final victory over alcohol, declared war on Coca-Cola, derision came from the formerly friendly."

"At the spectacle of men returning home, sodden with Coca-Cola, to beat their wives, (or) the sight of little children tugging at their fathers as they stand at the Coca-Cola bars long after midnight ... we remain unmoved."

Eventually, even the "drys" realized there was profit in booze and many of them were caught red-handed, either drinking the stuff, providing for parties and gifts ... or profiting from its sale.

In the end, those who wanted Volstead repealed found sufficient resources and political clout ... as America lost its taste for Coca-Cola.  In 1933, Volstead was repealed.

More than anything, an economic phenomenon conspired to shove weary Americans over the line about legislated morality.

It was called the Great Depression.

Known to millions of school kids as Johnny Appleseed, John Chapman is legendary for having walked across Ohio and Indiana, allegedly planting thousands of tree seeds that would be left for ... um, apple pies.

Chapman, born in 1774 in Massachusetts, is credited with having a dream that if he planted enough apple trees that no one would ever go hungry. Failing that, McDonald's came along a few years later and finished the job, producing a rather decent apple turnover.

The fact is that most of Chapman's early apples were generally inedible. But when fermented, they became quite drinkable. In some seasons when corn mash was in short supply, a barrelful of Applesauce kept the doctor away.

Orchard cider was commonplace in rural Indiana. Chapman was more than willing to help get them going, though his eventual business plan was much more robust and lucrative.