Kenesaw and the '19 Reds 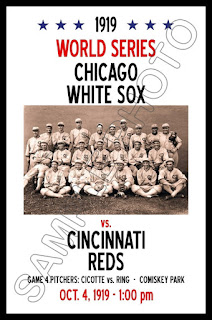 Arguably the 1920s are the most fascinating years in American history, excluding perhaps the time of the Civil War.

The '20s are the first decade of enforced morality, brought about by what seemed to be unconnected events.

The end of World War I gave rise to a new generation of Americans who saw an opportunity to mold morality and impose their own values on the citizenry. Not all of that was bad and much of it was good-intentioned. There was just a little bit too much of it.

A ruling in 1921 defined in succinct terms where we were headed with our morality.

A spitfire Tennessee judge named Kenesaw Mountain Landis, who had built a powerful reputation as a bench mediator in labor cases, expelled eight members of the Chicago White Sox baseball team for gambling away their chances of winning the 1919 World Series against the Cincinnati Reds.

The so-called "Black Sox" scandal was far-reaching and dips into some dark alleys, curious corners and complicated road maps, but it set a pattern for American social justice for a decade to come.

America was prepared and eager to have rules made and enforced to regulate their behavior. Perhaps the suffrage of women played a role in it, and doubtless ... it did.

Landis is a fascinating study in the conservative voice that emerged in the 1920s.

Baseball had always been a fertile ground for gamblers and it's estimated that many thousands of games were fixed in the 40 or so years that the sport had been considered "professional."

The 1919 World Series between the White Sox and Reds had been heralded as one between the two best-ever teams in Major League history. The 1918 season had been a disappointment after President Woodrow Wilson shortened it in deference to the war effort.

A year later, attendance was at record levels and dozens of new stars, including "Shoeless Joe" Jackson and Babe Ruth, had emerged.

The Sox were highly favored to beat the Reds, managed by Pat Moran and led by Edd Roush. As a way of improving profits, the series was increased to 9 games.

As the series approached, word got out about a possible fix, and the rumor inevitably proved true, though nobody was able to prove it.

That's the short course on the scandal.

The owners of the various 16 teams decided they wanted to end such bad publicity and hired Landis to oversee events. Landis was strongly moral and headstrong.

Other events were transpiring in New York, where the upstart Yankees had just bought Babe Ruth's contract and were building a palace for baseball called Yankee Stadium.

The balance of power in baseball was in Chicago. Not good, the East Coast investors said. Baseball needs to move its center to New York.

So as pressure came down the following summer, the Yankees were edgy about their chances. The White Sox and Cleveland were leading the pennant race.

With only a few games left in late September, the eight players were oddly indicted for gambling and immediately suspended by Sox owner Charles Comiskey. The Indians won the pennant. Two months later, Landis was hired to be baseball's first commissioner.

He had unlimited power and banished the eight Sox players. (Later, he banned or suspended several other players -- including Ruth -- for various offenses deemed "not in the best interest of baseball.")

In 1921, the Yankees, entrenched in their brand new massive ballpark, began a reign of dominance in the American League. The White Sox were banished to the desert for nearly 40 years.

For their part, the Reds players were frequently asked if they noticed anything. With some exceptions, most of them asserted that they had WON the World Series and that the Sox had not THROWN it.

Landis would set the standard for autocratic rule in baseball for decades to come.

It was a notion that would spread its tentacles over much of the nation's morality for another 10 years.

And it would create some strange heroes.