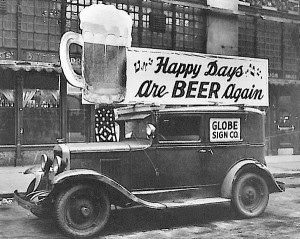 So, in the end ... who profited from Prohibition?

Oddly, it was government.

Dan Okrent, in his study of the Volstead Act in "Last Call," asserts that the end of Prohibition effectively did what the repealed act intended:

It reduced the amount of alcohol that Americans consumed.

During Prohibition, in the early years, Americans naturally drank less, but as time went on, thirst re-emerged as speakeasy operators began to profit from a natural propensity for people to want to have fun. Illegal booze fueled the legend of such gangsters as Al Capone.

And a lot of alcohol was not only illegal, it was sometimes fatal. Alcohol poisoning was not rare.

In truth, the end of Prohibition came when the federal government, groping for new tax revenues, needed a way of kicking business in the ass.

Prohibition was useful in another way, since it showed that the government could control the lives of its citizens, even if the citizens threw a temper tantrum over it.

When Volstead was repealed, governments stepped in and introduced liquor laws that controlled consumption, sales, hours ... all sorts of rules that had not existed before Prohibition. In that respect, Okrent concludes:

"In enacting their own dry laws, some states encouraged a hybrid drinking culture incorporating Prohibition's pieties, Repeal's realities and a bizarre set of signifiers specially their own."

In some dry areas of the south, profit could be made in selling whiskey to anybody but the people who lived there. Many areas of heavily-Christian South remained dry long after Volstead's repeal ... and some still are. Jack Daniel makes whiskey in Lynchburg, Tenn., a town where its residents couldn't even buy the stuff. 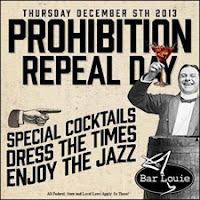 As well, Okrent concludes, the passage of the 18th Amendment and its subsequent repeal in the 21st Amendment showed that Americans could be ruled by their own leaders, something that had been alien to many in the pioneer areas of Indiana. From that emerged a long series of influential voices, many of whom are nothing more than footnotes to the story.

The dots that connect from 1913, when the federal income tax was adopted, through the trying times of World War I, and into the 1920s, Okrent summarizes:

"The wholesale enactment of national criminal laws during Prohibition gave rise to post-Repeal federal statutes addressing kidnapping and bank robbery; on the other hand, the manifest failures of federal Prohibition enforcement enabled the states to hold on to most of their authority over enforcement and administration of criminal law."

The voice of the states was clear, particularly in matters surrounding school desegregation. Foes of integration simply argued that a national policy regulating the morality of the states was a recipe for failure. The connection seems vague, but policy often is the result of unrelated arguments brought together by a common event.

When Volstead was repealed, the states enacted their own unique laws regulating the sale and consumption of liquor, which would likely never have occurred had they not been forced to accept it on a national scale.

Statistically, one study showed that Americans actually consumed less alcohol after Repeal than during the years when all of it was illegal. And the trend continued for several decades until the late 1970s when several states lowered the drinking age from 21 to 19 or 18. Once those laws were repealed, consumption again declined.

The logic that allowed teens to drink was winding. If one was eligible to serve in the military at age 18, the thinking went, then those people should be given the vote. Good idea. But, if one can vote, then one is logically an adult, right? Good, let 'em drink.

After the highway carnage ballooned, the states were essentially told to raise the drinking age or forfeit highway money.

The federal government does indeed hold the hammer at times.

Future arguments over the legalization of various drugs will bring Volstead into focus again.

History has a way of identifying the winners and losers. Often, they are one and the same.