Vas you effer in Philanthropy?

If you have been to Philanthropy, you probably passed through Sentinel to get there.

Or so asserts August Reifel in his 1915 history of Franklin County.

Those two towns exist today but you won't know them by those names.

As you might not in several other communities in Franklin County, some of which were never platted in the first place despite good intentions.

Lucky for us, we only have one name for Fairfield and we know right where it ... was.

Reifel's history cites nearly 40 planned communities in the area south from Connersville to Dearborn County that either never truly existed or lasted only until the families who lived there decided to do something else with their free time.

Most likely, you've heard of Old Bath, which is really Coulter's Corner, two miles west of Regular Bath. Blooming Grove was originally known as Greensboro, alternatively as Greenbrier. (At one time, there was another "Bath" just north of Fairfield, which eventually just became Bath Springs.)

Some other interesting towns:

Cedar Grove was once known as Rochester, and Whitcomb was originally platted as Union.

Sprinkle in some places that are generally known but hardly towns -- Sharptown, Highland Center, Yung, Rockdale ...and if you've been to Palestine, you've been to Wynn. Same place.

At one time, the area including Connersville was in Franklin County so a few platted towns that didn't develop are located in Fayette County, including Darlington, New Washington, West Union.

Ferona, Franklin, St. Bernard, Lebanon and Sabina never took root in Franklin County, though many of these non-towns were victims of the name game. They could plat all they wanted, but there was not going to be two towns in Indiana named "Lebanon."

Not having a post office or a way to get there was often a deal-breaker.

No one seems to know why such towns were promised, never platted, or why anybody even bothered in the first place.

Union County has similar dots on the map, such as Scratch Gravel, Salem, Philomath, Contreras, Charlottesville.

Google can pinpoint most of them, oddly.

Reifel says Franklin was close to being a town and there is evidence that freed slaves were being given a chance to move there, a plan that never really amounted to much. It's in Butler Township.

There was also apparently a North Vernon in Franklin County. What it became is uncertain.

We are also sad to hear that Ceylon never amounted to much, after Thomas Anderson bought the place and renamed it Andersonville.

Other chunks of farmland became part of Brookville over the years, such as Buncombe and Butler's Run, or Stavetown.

And somebody evidently decided "Kokomo" was a good name for a Franklin County town. We'll have no luck finding it.

That brings us to Sentinel (Mt. Carmel) and Philanthropy (Scipio.)

By the way, do you know the directions to Baltimore?

Reifel goes into some detail about the planned community of Baltimore that was designed to profit from the immense economy of the lucrative Whitewater Canal. Reifel calls it a "paper town ... it never passed beyond the plat stage and the subsequent flamboyant description of the proposed town in the papers when its lots were opened for sale."

Evidently the developer propped up something pretty amazing in trying to sell Baltimore to investors along the canal.

"Probably no town in the county was ever pictured in more glowing terms than that laid out by James Conwell in 1836."

Conwell advertised in the newspapers that he had available for sale about 300 lots, situated on the Whitewater River.

Conwell's plea was succinct. "For many years past, the subscriber (Conwell) has been urgently solicited to lay off a town at this point, and dispose of lots; but has always heretofore refused on the ground of his irreconcilable aversion to trifling country villages, whose population is too frequently composed of the idle, dissolute and intemperate portions of the community."

In other words, Conwell was determined to build an upper-class town that had substance, growth potential and did not include drunken bums or sinners.

Indiana's internal improvements program was in full gear, and the seemingly endless supply of wealth to be had from the canal gave Conwell added ammunition.

His sales pitch was loaded with superlatives, citing "natural advantages it possesses, others that will render it a point of great importance for business of every kind, and secure the erection of a town not surpassed by many."

Conwell's mills did, for a time, generate considerable business in carding and fulling wool, a tannery and a lucrative blacksmithing business, as well as grain and saw mills.

The pitch went on to say that "during the last 16 years that the subscriber has resided in this neighborhood ... but a single death has occurred during that time."

Conwell hoped to build Baltimore as the canal system grew. Conwell apparently believed his industrial park would endure and grow and with it, his dream town of Baltimore. He acknowledged that there was talk of a railroad but dismissed it in his appeal to land speculators. "The White Water canal will be the obvious channel through which this immense trade will pass."

If you were interested, sobriety and good moral character were necessary. No gin mills were in the plan, but seminaries would be welcome.

A third of the purchase price was necessary immediately. 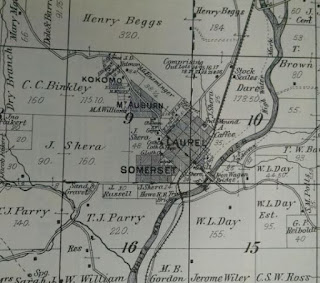 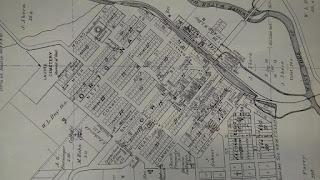