Before we went boating ...

So, what did we do for fun in Fairfield before the government gave us a place to go boating?

By the end of the 1940s, the public was on wheels, folks were working and ... getting married.

But most recreation was for adults in those days. It would be a few more years before the baby boomer kids would need something to do to stay out of Mom's hair and in the streets where they belonged.

Actually, playing in the streets in Fairfield in those bygone days wasn't particularly dangerous. 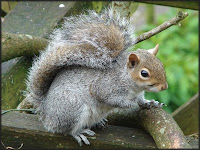 Aside from that, we had ... yes, squirrel hunting.

In fact, the Brookville Democrat made a big deal out of it, posting the annual season report on the front page each August, dating back to the end of the 1930s.

"Harrell F. Mosbaugh, director of the Division of Fish and Game, said that indications point to a better squirrel season this year than in 1943."

According to Mosbaugh's estimate, reports from 59 out of 75 conservation officers showed that the squirrel population was higher than it had been in the previous year.

It is not important to ask who actually COUNTED this "harvest" of furry fun.

So, if you didn't want to traipse the woods in search of cheap meat, then what?

Well, there was horseshoes. The Democrat kept the league standings. Top pitcher in those days was Hubert Lohrey, with Bud Hofer, Vernon Price and Larry Hannebaum usually leading the way. Lohrey scored a ringer about 40 percent of the time, the data shows.

Meanwhile, "at a special meeting of 400 parents, teachers and school patrons held in Wichita, Kansas, it was agreed that sex education should begin in the schools at about the fourth grade. The meeting did not vote to institute the instruction in the Wichita schools."

More genteel recreational activities included many in the valley.

"The growth of home economics work in the county was discussed briefly (at the annual meeting), following which all those who had been members of home economics clubs for 10 years or more were asked to come forward and presented with a rose in honor of their service. Twenty-three 10-year members were present."

A thrill a minute.

That week, the county's men were making plans to conduct the "Big Fox Drive" at Blooming Grove. The objective was to cull the valley of the pesky creatures. A dead fox was worth a small bounty.

4-H for girls was a big deal in Fairfield.

Betty Louden, who was the reporter for the Fairfield Boosters, revealed that the Boosters held their first meeting on May 17 "at the home of our leader, Lucille Burke. Marlene Personette had charge of the meeting. Twelve members were present and 3 visitors."

Wilda Snyder gave a talk on safety. She gave all members a chance to give an opinion on safety around the household. One gave a good hint. Music by all and refreshments were served."

Come on! What was the one good hint?

Also, "Mrs. Gradie Boyd took her Sunday School class of boys to see "Prince of Peace" at Brookville Saturday afternoon. Transportation was made by Kenneth Davis in his school bus."

That would be the Morin Theater, Brookville's finest.

"The Young Peoples Class of the Sunday School are planning a chili supper to be held Friday evening of this week."

"Walter Underwood, Brookville's Hot Rod race driver, is being held in the Fayette County Jail on a narcotics charge. The arrest of Underwood was made at Metamore on Tuesday, when it is reported he turned over a large quantity of mariuana to a federal undercover agend in exchange for marked money."

By the early 1950s, shuffleboard programs had been implemented in Brookville, as well as tennis, softball, ping pong and horseshoes.

Softball was big in those days, and church league games were well-attended.

The Fairfield Methodist was apparently a powerhouse in 1955. Led by pitcher Vernon Price (wait, the horseshoe expert!) and the Logan brothers, The FFMC juggernaut crushed Springfield 22-8.

No further word on how the team fared is readily available.

Games were played at the Brookville Town Park. 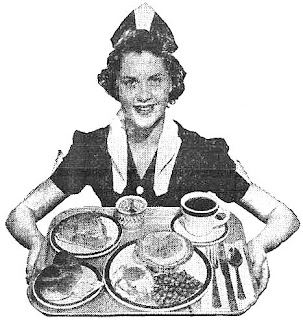 This photo from a 1955 Democrat, includes this caption information: Miss Joan Curts, daughter of Mr. and Mrs. Clarence Curts of Brookville, is shown with a typical meal that will be offered for $1.35 at the cafeteria in the new $300,000 Service Building which will be open for the first time for this year's Indiana State Fair visitors. The State Fair opens today and will continue until Sept. 12. The new cafeteria is designed to serve 1,000 meals per hour. Miss Curts graduated from Brookville High School with the class of 1953.