Route 101, all the way to Roseburg

... or how I learned to love concrete.

It's difficult to form any conclusions about the overall opinion regarding the construction of State Route 101 from Brookville to ... um ... well, Liberty.

It's difficult because news reporting of the event bordered on the absurd.

As in, if you didn't know where to look, it would be like a tree falling in a forest.

S.R. 101, or what it became, was partially a product of President Roosevelt's "New Deal" during the Great Depression, though the actual designation of the road preceded his inauguration in 1932.

The Works Progress Administration (WPA) project was, to say the least, necessary under any conditions. You'd just have a helluva time proving it. One might assume that the highway to Liberty wasn't all that popular.

The Franklin County Surveyor's office provided the dates for the more notable moments in the building of the highway, which crossed the East Fork of the Whitewater where the bridge is located today just below the dam.

From there, the road skirted the valley on the east side, slicing through clay banks on its way to Fairfield. It was to replace an ancient toll turnpike that mirrored one (so to speak) on the west side of the river. Various bridges came and went to help farmers traverse the stream.

The covered bridge at Fairfield linked the west side of the river to the town, northward into Union County.

The first useful Brookville Democrat report on the work boldy said in July 1931: 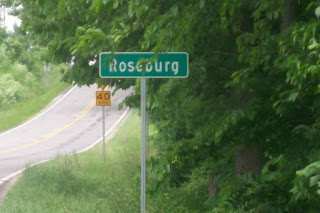 Brookville and Liberty are at last linked by a state road.

The final step in this direction was taken when the Union County Council authorized the appropriation of $3,500 as this county's share in the cost of building a new bridge over Hanna's creek.

The new road has been designated as Route 101 and is shown on the latest edition of the state highway map. Under the new numbering, Route 44 will start at Roseburg.

Robert Boren, of Fountain City, member of the state highway commission, has stated that construction of the $35,000 concrete bridge will be started within two weeks. It is to be 150 feet long and 24-foot roadway.

State maintenance and marking of the road to Brookville is to start at once.

So far, so good, right? The "highway" was simply a state-designated route. No real road as we know it existed. This process only allowed for a bridge to be built near Roseburg.

Roseburg was apparently important to the process since the road from Fairfield wound along the river and eventually crossed over at Dunlapsville, a mile west of there.

News reports on the progress of the work get much sketchier as the months dribble by, so much so that headlines declaring the opening of squirrel season are higher up on page 1. Tidbits about the highway are shoved in as "filler."

The Brookville-Roseburg road was taken over by the state Highway Commission this week. A crew of men have begun the work of maintenance. the road will be known as State road 101.

North of Roseburg, it was to be S.R. 44 for some reason. No explanation as to what "maintenance" entailed since grading and paving were still in the exploratory stage.

It's important to note that the state was taking control of many roads in Franklin, Union and Fayette counties during this time, including S.R. 121 from Laurel to Connersville, and U.S. 52 toward Metamora. As well, paving of S.R. 1 to Connersville was in the program.

By 1933, paving actually took on dimension. Out of the mud and gravel came Indiana's highways.

STATE ROUTE 101 TO BE PAVED

According to an Indianapolis dispatch, the contract for paving of state Road 101 between Brookville and Roseburg will be let September 21. Although nothing definite regarding when actual paving will begin can be ascertained at this time, it is assumed that this work will begin immediately after the contract is let.

Sure enough, a couple of weeks later:

The Indiana Highway Commission Wednesday awarded a contract for paving road 101 in Franklin and Union counties, a distance of 7.049 miles to Roseburg, Burns and Company for $149,336.46.

The Fieber Gravel Washer of this city had prospects for getting a contract to furnish gravel on the projects.

That basically covers it.

After the paving was complete, the old wooden bridge over the river was replaced in 1934. Eventually, the road from Brookville to Roseburg became a road to Liberty, since Roseburg lacked many of the tools necessary to establish itself as a destination.

All in all, not much fanfare. Then again, it wasn't a federal lake.


*
FYI: The Democrat and the American were both published in the same shop and contained practically the same content. They allegedly represented the political parties, mostly in name only.