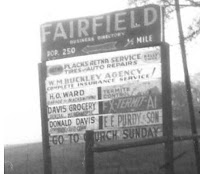 Over the course of the four-ish decades that I included for my random searches for anything and everything that seemed interesting about Fairfield, there was no real shortage of Page 1 news in the Brookville newspapers.

By definition, "news" in those days was anything local that was fit to be reported and set into type.

"Albert N. Gant, Franklin County Attendance Officer, has issued his report for the second six-weeks period of the 1949-50 school year. He states that the attendance for the first 12 weeks of the school year is the best in the past four years and shows a vast improvement over the years previous to 1946."

"Some sickness was reported such as mumps at Oldenburg, scarlet fever at Blooming Grove, whooping cough and one school reported impetigo. No school was hit hard by these diseases and on the whole the county is reported to have very good health record."

"Brookville will follow in step with most other communities in this section by adopting Daylight Saving Time again in 1950. A committee ... representing the Chamber of Commerce appeared before the Town Board ... and reported the local Chamber favors adopting fast time. The board passed a resolution favoring the adoption of Daylight Saving Time on Sunday, April 30, at 2 a.m."

Standard and Daylight time did not become federally regulated until 1967.

"Mrs Christina Kurtz of Fairfield celebrated her 99th birthday on Wednesday, June 20th, at the home of her grand-daughter, Mrs. Walter McCarty. The noon-day meal was enjoyed by the following: the guest of honor, Mr. and Mrs. Howard Snider and daughter Alice, and Mrs. and Mrs. Walter McCarty and family. The day was spent quietly."

Page 1 news if ever there was some.

"The farm home of Joe Glaub, located north of Fairfield, was completely destroyed by fire on Tuesday morning of this week. The Rural Fire Department, from Brookville, and the Liberty Fire Department responded to calls for help. The fire, fanned by a strong wind, hjad gained so much headway by the time of the arrival of the fire departments that the building was consumed. Several nearby buildings were saved." 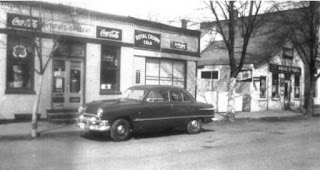 "Mr. Glaub, who is an invalid makes his home with his daughter, Mrs. Mabel Davis. he was carried from the building in a wheel chair. Neighbors helped save some of the contents."

"This was the second time that fire had destroyed a house on the same foundation. A house located there was completely demolished in 1928."

Sad stuff, the reality of living in the country.

And Howard Snider, who had a woodworking shop in town, didn't escape the wary eye of the reporter in this 1951 tidbit (not Page 1):

"While using a shaper in his woodwork shop last Wednesday, Howard Snider suffered the loss of the end of his left index finger at the first joint. He was taken to the office of a physician where the injury was dressed and cared for."