Back home in Fairfield, you'd wake up every morning around dawn, make the coffee and tune in the Motorola or the Philco, listening to the hog reports, waiting to hear news from the Front.

The Front, being ... anywhere in the world that wasn't Fairfield.

Not all the news was bad, and none of it was terrible. In most cases, the news was good. There was logic to that. Winning a war must first claim a casualty called The Truth. In the years following the repeal of neutrality that came with the declaration of war against the so-called Axis, Americans were trained to know only what the War Department told them.

We were winning, slowly but surely.

Which meant, if you had a son in conflict, you knew almost nothing until it was reported through official channels. The Brookville newspapers, though only weeklies, did a marvelous job of informing the populace of goings-on with their soldiers.

And there were many soldiers. Across the country, millions.

Even more millions from other lands who had joined the Allied cause.

The Democrat-American published, in 1942, this dispatch:

"The largest number of Indiana men ever to enlist in the United States Marine Corps in any one month joined the Marines during December, according to Capt. Ralph E. Boulton, Officer-in-Charge of the District of Indianapolis, which includes the entire state of Indiana. Last month, 304 Indiana youths ... were enlisted."

Boulton was quoted: "We welcome every young man with a sound body and a fighting heart who wants to defend his country."

The Marines, according to the article, became appealing after reports of their courageous stand against the Japanese in the Pacific battles.

A lot of what was reported was the result of non-stop, regulated patriotism. Blood drives, war bonds rallies ... all designed to keep the public involved in the pursuit of victory. The "Victory Garden" was a staple enterprise.

Civilian defense rallies were common, and gave local officials a chance to prop up duties and expectations for the public. To some end, not participating was generally considered bad form. And in reality, not participating in the war effort was a bad idea.

"Norman W. Gordon, administrator of the Indiana Store License Division, announced today that some 70,000 merchants who have filed applications for new licenses can expect some delay in receiving their 1942 certificates due to a paper shortage at the mills and to priority on federal printing jobs.

"Mr. Gordon pointed out that the applicants need not let the delay be a source of anxiety to them and that no penalties for delinquency will be enforced as long as the applications for 1942 license are made prior to Jan. 31."

The war bonds drives were relentless.

Secretary of the Treasury Henry Morgenthau Jr. (etc.) will speak on a special broadcast tonight over the Blue network from 10:00 to 10:30 p.m. The broadcast will be devoted to discussion of the national war bond quota system and the 10 percent payroll savings plan.

The broadcast was to include several military leaders, as well as labor union officials and chief officers of many national business organizations.

"All retailers and wholesalers of sugar in any form (except molasses); all restaurants, bakeries, churches, which use sugar in the cooking of meals; ice cream, soda fountains, soft drink bottlers, commercial fruit canners ... are required to register with the Rationing Board at the Lew Wallace gymnasium." 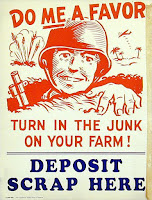 Sugar users were required to reveal how much of the product they used during 1941 and adjust accordingly. "If this information is not available, the actual amount of sugar used in March 1942 must be recorded."

The local Rationing Board and its "required" registration. Enough said.

After that, most Americans faced a regular reminder that they needed to share 10 percent of their income with the military forces fighting the evil Axis powers.

Scrap metal drives were common and successful. If it was metal and didn't work, it became an artillery shell.

"Farmers who have not reported scrap are urged to do so before next Wednesday." They were to be paid $10 a ton for heavy scrap. Many refused the money, donating for the cause. Countywide tin-can drives, made house-to-house or at designated pickup centers, were also popular.

To some end, all of America gave 10 percent of almost everything.

It's no wonder we won the war.

THE IMPACT OF RADIO