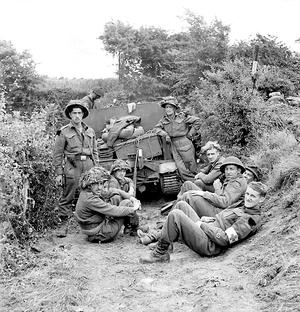 While the county collected tin cans, held blood drives and issued rationing stamps, time trod slowly onward into the second and third years of what soon became a global conflict with real concerns at stake.

This was not a war about water rights.

And with each week, another boy here or there turned 18. The Brookville newspapers were full of snippets about who was assigned where, and how long they'd be on leave ... but usually not where they were going once they went back to their units.

In February 1943, the Democrat listed 21 Franklin County men who had been inducted into either the Army or the Navy ... names you'd probably recognize in one form or another ... and another 16 who had enlisted but were not yet eligible to be inducted. At least three of those names -- Charles Flack, Wright Buckley and Harold Scherer, were from Fairfield.

In all, more than 10 percent of the county's population was actively involved in the war effort, in uniform. How many were sent to the fighting? The records are there.

Some did not return.

The newspapers are full of interesting tidbits about what life was like on the home front and the battle front.

ARMY DESERTER IS
ARRESTED AT CABIN

Near Peppertown, Sheriff Cliff Bruns apprehended James O. Quinlan, 31, for desertion from the Army. The soldier was making his second attempt to neglect his sworn duty.

"Quinlan left Fort Benning, Ga., May 25, and since that time had been sought by authorities. Officers had arrested Quinlan five months previous to his second desertion, in a cabin in another woods, and had turned him over to Army officials."

The sheriff said Quinlan was being cared for by relatives in the Peppertown area.

SHORTAGE OF LABOR
EXISTS IN THIS AREA

"The fact that the Muncie-Marion-Richmond area continues to be a labor shortage area is proof of the necessity of meeting manpower problems by strengthening tried and tested volunteer manpower programs," said (a labor official blah blah blah) ... "and the programs which are now being applied here hav been tested elsewhere and have proven to be successful."

A mouthful of nothing, it seemed, but the report -- in its convoluted way -- emphasized that wartime manufacturing quotas needed to be met.

How that happened was probably more up to the company than the government, but women were clearly considered vital to the process. It was also not uncommon for high-school students to take time off from their studies to work in industry.

STUDY OF THE ITALIAN CAMPAIGN