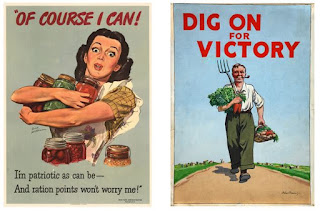 In a world much different from ours in a time that even history books can't completely explain, one component of World War II was consistent.

Americans were ready and willing to sacrifice personal "freedoms" for the good of the war cause. Listening to the politics of modern America, one wonders if modern pundits have a clue about how we got to this point.

Aside from the standard rationing of gasoline, rubber, sugar and electricity, the nation was absorbed with producing more.

More of everything, so long as it was deemed useful for defeating the evil Axis powers in Europe and the Pacific rim.

One story has endured and with good reason: The Victory Garden.

Such a concept could scarcely be considered now.

In March 1942, four months after the attack on Pearl Harbor (12-7-41) the Brookville American ran the following story:

"The Victory Garden program continues to meet with enthusiastic interest throughout the county. Several communities have arranged to hold group meetings for the purpose of effecting the most productive methods of small-space gardening. Colored slides showing the best known insect control policies are being used. The meetings are livened with the screening of a health picture and a "talkie" comedy."

Whoa, the "talkie" comedy would get my attention!

Meetings were planned in Springfield, Bath, Metamora, Peppertown, Oldenburg, Laurel. Though Fairfield isn't mentioned, it's assumed there was at least some interest in the Victory Garden program. It's likely a meeting was held there at some point.

What seems obvious is that Americans, a full four months into the war, were quite aware that the conflict would exact some heavy demands on the civilian population.

It's also worth noting that the nation had some fairly strong memories of the first World War, which had ended in 1918. Feeding an army was always a challenge. America had the capability, if only her citizens would participate.

And participate, they did.

Farmers were constantly being reminded to stay abreast of changes in rationing restrictions, particularly if they wanted to purchase equipment -- inconceivable in modern America.

"Instances have been reported of persons driving many miles to the nearest War Production Board office, asking for a certificate to purchase equipment, only to find they had gone to the wrong agency."

So, the pressure was on -- produce more food but be prepared to negotiate a maze of bureaucracy if you need equipment to get it done.

The premise of the Victory Garden was simple -- grow more than you need, make the rest available to be canned and learn to be self-sufficient. A cannery in Metamora during those early war years issued regular appeals for workers to produce food that could be packaged into ready-to-eat meals for soldiers.

By the end of 1942, the Victory Garden was in full swing. Organizations such as Kiwanis, 4-H, home economics clubs and extension services were structuring useful activities for full-scale implementation in 1943.

Demonstration plots were set up, which helped gardeners control insects, and weeds, as well as teaching them to can their food. For those who didn't have a space to plant a Victory Garden, plots could be obtained. And, a clearing house for surplus vegetables was set up.

The "Big Four" of canning, the newspaper penned, were "tomatoes, green beans, peas and corn."

And "for variety, Hoosiers might plant cauliflower or broccoli or Chinese cabbage." Tips were included on soil fertility and how to buy plants from local greenhouses.

Turnips and onions were also nice choices for storage, the American wrote.

So if you grew too much?

"The Surplus Vegetable and Fruit Committee of the Franklin County Garden Committee in an effort to prevent waste of vegetables and fruit for canning purposes, have worked out a plan to equalize the supply in the county."

(We call that socialism today.)

"Many gardeners will have an over-supply of home-grown vegetables, or fruits, while others who desire to can such produce will not have a sufficient supply."

"To accomplish this saving, and to provide for equal distribution, the committee has established a 'clearing house' with Mrs. Bessie Dare in charge. Growers having a surplus and persons in need of products are asked to cooperate with the program by calling Mrs. Dare, Phone Brookville 124-M and register their names."

Meanwhile, truck drivers who hauled farm produce were required to "keep a complete weekly record of mileage, gasoline consumption, and tonnage, as required by the ODT. It was pointed out ... that such a record will aid truck owners in getting tire replacements, either recapping service or new tires.

"The statement also emphasized that it will be necessary to have this complete record in order to establish a basis for gasoline needed in the operation of trucks in this classification."