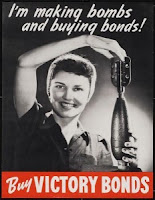 As war raged in Europe in 1940 and 1941, most Americans were probably content in knowing that the equipment being supplied the British forces was adequate. The notion that an entire nation would need to rise up was outside the scope of comprehension.

In fact, the Brookville American, in a brief article in late November, 1941, cast this somewhat innocuous report:

Stanley J. Williams, who has been stationed at Pine Camp, New York, returned to Brookville Saturday. Mr. Williams was transferred to the Enlisted Reserve Corps, under the Selective Service Act amendment which provides for the release from active duty all men over 28 years of age. Williams entered the service on May 13th. he will return to his former employment at the Franklin Manufacturing Co.

Word has been received from Pine Camp that Private Robert (Steve) Ausman had also been released because of the age limit.

On Dec. 7, the Pacific fleet smoldered in ruins in Pearl Harbor.

And by February 1942, the headline in the American was clear:

Monday Date of Registration For
All Unregistered Men Age 20 to 44;
Fourteen Places in County Designated

The sub-head said that men between the ages of 21 and 26 who had registered for the draft in the previous year didn't need to do so again.

The Town Hall at Fairfield was one of the 14 places where registration would be held. H.D. Butcher was in charge of the Fairfield registration.

A month later, the county began its first Red Cross blood drive ... "for emergency use of combat forces."

Mobile units descended on virtually every populated area in the country, and "no preliminary testing of blood (is) necessary." Only plasma was to be used.

The local chapter of the American Red Cross coordinated the blood drive, one of many over the course of the war. 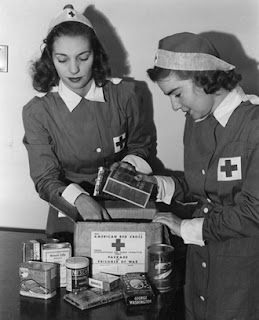 The Red Cross managed several forms of donations, appealing to the natural sense of patriotism.

"We have many enemies. Wake up and realize that the Red Cross is the medium through which we can express our sympathy and give assistance to the ones in great peril and need."

So it was about more than just blood plasma.

"Don't sit idly by, thinking that we of Franklin County are immune from air attack or other horrors of war. Many of you ... have given, generously. But, others that can well afford to, have not."

The appeal to guilt worked pretty well, one assumes. The goal in the first part of 1942 was $3,000 for the county.

By April of 1942, the newspaper announced another phase of the draft, this one "to register all men 45 to 64 inclusive on that date."

One can assume that a degree of panic had begun to set in, since men approaching retirement age had little left to give.

But some of them obviously showed up at the Town Hall to answer the call.

"Persons physically unable to appear for registration should get in touch with the chief registrar in their community and ask that they be taken care of."

And, only 9 questions were to be answered:

Seemed easy enough. How sick did you have to be to be exempt? It's not clear, so we must assume you'll be healthy soon.

Meanwhile the war bonds sales began to pick up steam.

Nearly anything that could be used for the effort was appropriated.

And Stanley Williams and Steve Ausman doubtless went back to war.