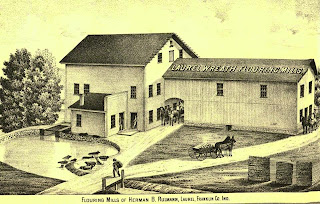 The cost of living has always fascinated history seekers.

Had there been cable television in the 1850s, a subscription would probably have been something around 40 cents a day. An automobile? Are we talking one with air conditioning?

The products that people in the Whitewater valley purchased in 1850 largely depended on what they could sell. Agriculture was the only flourishing industry in much of rural Indiana, unless a man worked at building the railroads or the roads.

As should be expected, the Cincinnati market was where it was at, cat. Prices there dictated values elsewhere. A farmer sold his hogs when he could, hopefully during a time when prices were high.

Inflation was relative. The cost of transportation varied little from year to year, though seasonally, river shipping could be affected by high water or ice.

August Reifel, in his 1915 history, has provided a few numbers:

And if you bought the Brookville American, the grandest newspaper of all, you paid $2.50 a year, in advance.

But people needed other things too, namely, cloth.

The numbers probably don't mean much because it's hard to tell whether consumers actually bought products from established mills, or if they simply made their own clothes.

One could assume that the Laurel numbers were more directed at bigger purchasers, who turned the wool into larger quantities.

By 1915, the last year Reifel could evaluate prices, a gallon of coal oil (turpentine) was selling for 15 cents for best grades; iron bars and rods were going for 3 cents.

Corn was 72 cents a bushel, or about a dime more than it had been in 1869. Hogs were selling for $6 a hundred; and cattle were around $8 per hundred-weight. Sugar was a nickel a pound and coffee was about a quarter.