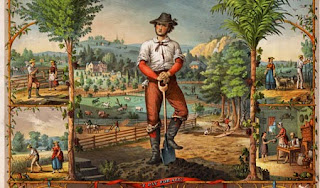 In what appears to be the origin of the county fair in Franklin County, an Agricultural Society was formed in 1844. Samuel Goodwin, George Kimble, Jeremiah Woods and John Matson were its early leaders, according to Reifel's history.

The organization may have gotten off to a rousing start but was in no hurry to redeem its excitement.

Reifel says "the society appears to have vanished for some reason not known."

In any event, attempts to revive the society met with some success in 1852 and an early fair was held in October that year in Laurel. C.F. Clarkson, M.V. Simonson, J.H. Farquhar are among the named officials.

I can't find any names in the reorganized board of directors who have obvious ties to Fairfield though a reference in Town Under the Lake lists the following:

J. H. Tatman
J. H. Tatman, the celebrated Daguerrean artist, informs the citizens of Fairfield and vicinity that he is now prepared to take pictures (Daguerreotypes) in the most approved style of the art. Mr. Tatman received the premium at the first Annual Fair of the Franklin County Agricultural Society, with several competitors, which is good testimony that his pictures are of the superior kind. He will remain but a short time. (November 19, 1852, Franklin Democrat)

Reifel describes the organization in a rather disinterested way. "Monthly meetings were held by the society and topics discussed and papers read which were of interest to the members."

As such, the organization ran its business for 20 years before evolving into a Joint-Stock Agricultural Association in 1872. It's about then that the concept of the county fair took root. "This latter body held fairs and expended some means in filling up their grounds, and otherwise attempted to build up an interest in comparative exhibition but all to no profitable purpose."

Reifel's explanation as to when the fairgrounds existed and where is somewhat confusing. He does say that the first fairgrounds used by the association in 1872 was located on the river, west of town.

The organization had a specific set of principles:

"United by the strong and faithful tie of agriculture, we mutually resolve to labor for the good of our order, our country and mankind. We shall endeavor to advance or cause by attempting to accomplish the following objects:


Other goals were to avoid discussion of political or religious questions, promote child welfare ... and strengthen the credit system. At the state level inside the hierarchy, that political principle changed to make Granges much more influential. The objective at the local level was to foster unity of purpose.

One interesting part is the so-called "last but not least" addendum. "We proclaim it among our purposes to inculcate a proper appreciation for the abilities and sphere of women, as is indicated by admitting her to membership and position in our order."

Grange has been irrelevant for many years.

A BIT ABOUT THE ART OF DAGUERRE

A BRIEF HISTORY OF THE GRANGE