It is a phew phantasies from Phairfield to Philadelphia, but in 2016, the Democratic National Convention did indeed nominate Hillary Clinton as its candidate for U.S. President.

A woman named Susan Brownell Anthony emerged in the 1860s as a prime activist in search of the right of women to vote. Voting? Women? You must be mad!

Anthony was a Quaker, and Quakers were opposed to almost everything. Among them: Slavery, drinking, war. They were also in favor of giving women some rights that the men they adored had taken from them.

In other words, Susan B. could have been called a "lobbyist bitch" by most men of her time, that being the time just before the Civil War. And afterward too, but that's probably being kind to her.

But she aligned herself with strong support from intelligent, affluent women and by the 1860s, she had established enough clout to organize a number of groups committed to equality, at least in some form.

In 1872, Anthony was arrested for voting in her hometown of Rochester, New York, and convicted in a widely publicized trial. Although she refused to pay the fine, the authorities declined to take further action. The trial was, by all standards, a mockery designed to ridicule uppity women (aka "lobbyist bitches").

A few years later, Anthony and a prime associate, Elizabeth Stanton, approached Congress with an amendment to the Constitution seeking the women's suffrage.

Stanton had been a fixture in Anthony's other fight: temperance. Cut back on the booze, boys!

Needless to say, Susan and Elizabeth were not particularly popular among the white male society that typically dominated white female society.

Anthony's biggest bullet in her fight to get suffrage came inside the Fourteenth (14th) Amendment, which effectively ended slavery.

Nope, that didn't work either.

The Supreme Court in 1875 (Minor v. Happersatt) ruled that the Constitution does not give anybody the right to vote.

After that, Anthony decided that the only recourse was to seek national approval of an amendment to the Constitution that did, indeed, give people the right to vote.

Later, as her notes, letters, clippings, essays and treatises began to pile up, she decided to put it into a useful form. Easier said than done, with about 5,700 pages in front of her. Anthony was overwhelmed at what she had accomplished in her work for women's suffrage. Yet, she had still failed.

"Miss Anthony, say hello to Mrs. Ida Husted Harper. This woman from a small town in Indiana will be more than happy to assist you in organizing your work so that women may soon get the right to vote."

That was in 1920, a century after her birth and a half century after she had been arrested for trying to vote in the presidential election. 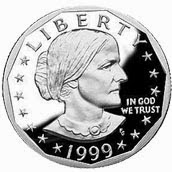 President Carter signed the Susan B. Anthony Dollar Coin Act into law in October 1978, authorizing the creation of the new dollar coin series. It was hoped this coin would displace the paper dollar bill in commerce, but "Anthonys" were generally ignored by the public.

+ The coin was similar in size and color to the quarter.

+ Dollar bills remained in circulation so there was no incentive to change.

+ Vending machines were not immediately programmed to take the new coins.

After several failed promotional attempts by various entities to get the public to accept the coin, production stopped in 1981, except for a one-year final issue in 1999.

The original design, in 1977, proposed having Martha Washington on one side and Miss Liberty on the back. But women's rights activists pushed for a more notable woman's image on the coin. Martha Washington did not, sadly, cut down any cherry trees or lead any troops at Valley Forge. Her husband ended up doing that and landed on the paper dollar and the quarter as a result.

Various designs for the new dollar coin were proposed. Finally in 1978, Anthony was chosen.

What are they worth today? Oh, about a buck.