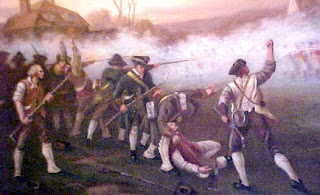 I had intended to do a blog item about some of the men and women who have served in the military over the years.

Having taken a look through a Julie Schlesselman book at the library, I realized that's probably far more daunting than practical. But if you do want to see who served in the various branches of the military, the book is for sale and naturally is available in the reference department (genealogy) at your library.

Julie's work was produced for the 2011 bicentennial celebration of Franklin County. It is a hardcover book and loaded with pictures, information and anecdotes about the county's veterans.

Ranging as far back as there was an Indiana, Hoosiers were called to serve in militia regiments, primarily as a defense against the native tribes who were not particularly happy that the white people had come to build roads, courthouses and whiskey saloons.

Mistreatment of the native Indians also contributed to the friction.

Some of that came during the War of 1812, when the British had allied themselves with the Shawnee and other tribes to fight the Americans in Indiana. In those days, "mustering" for service was not only common, but necessary.

"No recollections of early Franklin would be worth a cent which did not recollect general muster day. The period was near the close of the war, and patriotism was at a premium, and to hate the British was the bounden duty of everybody, and the statesmen of those days were sure we would have to fight them again at a very remote period; hence the laws required everybody between the ages of 18 and 45 to muster at least once a year."

It is worth mentioning that militia in those days recognized their leadership protocol. Soldiers were not managed by a bureaucracy in the Pentagon. Their commanding officers were their neighbors.

As a result, the functional militias were generally pretty well trained and knew their geography and overall notions about how to fight.

Reifel's report continues: "... and as there were men enough of military aspirations in every neighborhood to complain on the delinquents, it is easy to see that the crowd on muster day was immense, because everybody brought the whole family."

The muster was a big deal, but the picnic was even more fun.

It is also worth noting that not EVERY-one who mustered was of muster quality.

"The infantry and the other uniformed companies led in the march; then followed the great unwashed, the flat-foots, which constituted the finest possible burlesque on military movements."

Most everyone else just brought canes or cornstalks and pretended to march, "occasionally with fence rails ten feet long, sometimes four abreast and sometimes ten, some sober, but already many drunk before noon -- and thus they marched."

But it was a muster and it met the letter of the territorial law, designed to run the Indians away and keep the British on their side of the pond.

Most of these rag-tag volunteers were "dismissed soon after reaching the parade grounds, much to the relief of the uniformed companies which spent an hour or so drilling."

After that, talk turned to gingerbread, a favorite staple for the must-muster crowd.

After Indiana was granted statehood, the militia organization was improved, divided into divisions and brigades. Robert Hanna of Fairfield was one of the earliest leaders.

"From 1816 to 1830, the old militia system was very popular throughout the state. In 1828, there were 65 regiments organized into 18 brigades and seven divisions."

After the 1830s, the promise of peace across the valley had evidently taken root and it was not until the American war against Mexico in 1846 did the troops get called again.

After that, Congressional attempts to organize volunteer militias were largely a farce. "These laws provided nothing and required nothing. Many commissions were issued as complimentary to those who received them, but with the exception of a few companies of half-organized militiamen, scattered here and there throughout the state, the system was worse than useless."

That would be the standing matter until April, 1861.

Indiana got ready for war in a hurry.

REMEMBERING THOSE WHO SERVED (BOOK)

A WHIMSICAL LOOK AT THE AMERICAN MILITIA EXPERIENCE