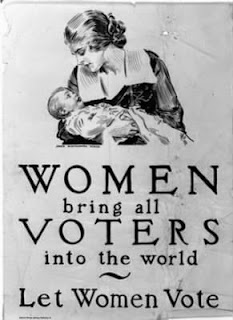 The notion that women could conceive of having the power of the ballot was not dismissed as a social joke in the 1880s, though most never believed it would actually occur. Women like Susan B. Anthony and her associates remained undaunted, however.

Ida Husted Harper had been writing about women's rights issues for decades. She was not unknown to Anthony. Harper was serving as the managing editor of the Terre Haute News-Gazette, an impressive title to be sure for a woman in 1878. But the position had given her some insight into regional and national politics.

That year, Anthony was appearing with Eugene B. Debs, the leading Socialist of his time, in a strategy that was designed to improve workers' rights by incorporating women into leadership positions. Debs was not especially popular among the men who owned the factories and businesses in Indiana. Debs saw Anthony as an asset. Anthony took all the help she could get.

Ida Husted Harper and Susan B. Anthony became friends of convenience at first, then became closer when Anthony agreed to let the Fairfield girl compile three volumes about what life was like trying to get women the right to vote. Harper thus became Anthony's official biographer.

"Although she wrote with wit and humor, Harper did not consider the women's rights issue a joke. She discussed it in her column so frequently that she received requests, especially from men, that she cease."

She did not concede on the topic.

"Besides, she wrote, men were responsible for the unequal status of women. Men made the laws and established the customs which barred women from true equality. Only through the consent of men could women enter colleges, speak in public, and choose careers. And it would be only by men's favor that women would someday be allowed to vote. Truly, the "opposing force" was men, who considered "the greatest favor they could confer was to marry [a woman] and allow her the privilege of keeping house for them.

"If Heaven is anything like this world we do not care to be an angel or carry a palm or play on a harp but only to be a man and take our chances."

Harper tended to waffle a lot on her perspectives, realizing perhaps that the only way to win the fight was to play by the rules until the rules were allowed to change. It led to a confusing biography.

But Harper remained strong in her support of Anthony's quest to have the 19th Amendment introduced and accepted. It would be many years before that happened.

In 1888, she wrote of the need for complete equality in marriage and vilified any idea that a wife should obey her husband. "The very idea seems ridiculous," she wrote."To obey another means to be ruled by this person. In a true marriage there will be no question as to which shall govern the other but it will be an equal partnership in every respect."

One can assume that her hardened stance on the marriage matter came as a result of being bolstered inside the suffrage movement. A conjoined objective was much easier to posit.

"The surprising part of it is that many honest, conscientious, God-fearing wives are so influenced by a sickly religious sentiment as to believe that the Lord intended the husband should be the master. They have been taught this doctrine by men-preachers from a Bible prepared by men-translators."

She may have come up with that without the aid of a Quaker friend's communication.

Harper eventually left Terre Haute and began branding herself as a voice in suffrage movements in Washington, and along the campaign trail, generally attaching herself to Democratic Party ideals. Soon after that, she spread her campaign to California.

She had become something of a notable, and had proven skillful in organizing and managing women's rights groups, many of which were nationwide.

"By the time the suffrage amendment was passed in 1919, Harper was one of the few early fighters alive to celebrate the victory: Lucy Stone had died in 1893, Elizabeth Cady Stanton in 1902, and Anthony in 1906. Harper herself lived long enough to see that her predictions for great moral changes from women's suffrage did not materialize. Women voted, certainly, but they voted largely as men did, along party lines and not in large blocs or for sweeping social reform. They did not win political power."

The truth was, women and the vote made little difference in those early years. Women were reluctant to express public support for candidates, fearing reprisal. They voted without substance. Candidates did not pay much attention to women's rights, which were virtually non-existent anyhow.

"In general, discriminatory legislation remained, treating women differently from men in such areas as labor, marriage, divorce, juror qualification, property, and inheritance. Nor were women allowed self governance in child bearing and child rearing."

The women's movement basically died on the vine after 1920 and did not re-emerge until the 1960s. The ill-fated Equal Rights Amendment failed in the 1970s after being first introduced in 1923. It has still never become law.

Harper wrote 1894:
"The evolution of women from the position of chattle to that of an independent individual has been in progress for centuries and is not yet accomplished."

Baker Jones concludes that Harper's writing reveals a woman who believed in social equality but had no grounds on which to base it. She had been raised in a world that subjugated women and she believed that women were probably unqualified to lead on their own. In a sense, Harper perhaps believed in true equality.

We are still debating that one.


MORE ON HARPER IN VIGO COUNTY