Years after the Civil War -- Part 2

What they wrote about the leaders of the 19th century:

I've snapped a few tidbits from an 1882 Franklin County Atlas of the biographies of some of the men who were considered prominent in the county in the period just after the Civil War.

These tidbits are of no particular value other than simply being representative of how the more affluent people either described themselves or were described by somebody who did the essay for them. There is some evidence that part of this process was either contrived or embellished beyond believable. No matter, it's in the book.

"Robert Stoops was born in Brookville Township, Mary 12, 1842, the son of Robert and Catharine Stoops (nee Carter). He was accorded the usual educational facilities granted to the young men of the day and took care to utilize them as much as possible. He has a very fine farm, about one mile from the town of Brookville and is considered as one of the progressive farmers of Franklin County."

Stoops also had a distinguished record of service in the Civil War.

John Shafer of Springfield Township is more revealing. "Among the pioneers who are living witnesses of the rapid growth and prosperity of Franklin County, who have spent the most part of a century in contributing their work and energy in connection with the early settlement of the county, and who have the satisfaction of living to see the grand results of their labor, ranks Mr. John Shafer." (Short sentences just don't work for this man!)

Shafer was a cooper in the 1830s and was siring children all through the 1850s. "He is a well-known and highly respected pioneer of Franklin County, and has, through a long and successful life, always conducted himself as behooves a Christian and a gentleman." 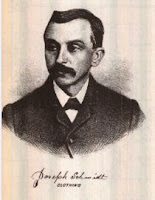 Joseph Schmidt's clothing business in Brookville impressed somebody. "Mr. Schmidt's long experience in the clothing trade, and his extensive facilities for buying, enables him to offer for inspection to the people of Franklin County a stock of clothing that cannot be excelled in the county."

Schmidt was born in Germany and came to America in 1867 and learned the clothing business while in the employment of a man named L.P. Strauss and Brother in Cincinnati. A year later he came to Brookville and bought a store that the Strauss brothers owned but wanted managed better.

Old John Goff was deceased by the time the Atlas got around to applauding his life.  "He lived with his parents (in Hamilton, Ohio) until his 20th year and then undertook what would be to the young men of our day (1880s) an almost impossible feat."

He visited his birthplace in New Jersey. On foot. Walked the entire distance there and back. That was in about 1816, so it was probably hard to hitch a ride to Little Egg Harbor.

Goff was a Democrat, father of 12 and a distiller. He made booze for a living. It appears Goff saw the light about the liquor and gave it up sometime around 1822. He was living in Bath Township. "He was one of those old pioneers who have passed away after a life of toil and hardship, incumbent upon all who undertake to settle and clear up a new country."

Chilon Gordon of Metamora was described as having "sterling integrity, good business qualifications achieved in ample competence, and is esteemed and respected by everyone with whom his business brings him in contact."

Gordon raised and sold hogs, cattle and sheep. He was described as a Methodist, unabashed in spending his wealth in support of that denomination.

Zachary Hutchinson was lauded for having "risen entirely from his own effort to the present gratifying position he now holds among the citizens of Brookville."

Hutchinson was named in 1880 as the Unted States Storekeeper. That job was later given to Sam Walton.

The late great John Wright (deceased at the time his biography was published) came to Franklin County in 1825 by way of the Dayton, Ohio, originally from England.

Wright was married to Cecelia Glidewell, a name prominent in the Fairfield area along where S.R. 101 now goes. Cecelia's dad was Thomas Glidewell.

Wright was evidently crippled but still strong enough to accumulate some real estate in Grant County as well as the Brookville area. "He was well known and highly respected for his honest, upright life and noble traits of character which it was his fortune to possess.

I will pull out some biographies of some more influential people with Fairfield roots. Those will come later.

Well done, sirs. Your stories are refreshing, even if slightly full of Chilon Gordon's most famous product.