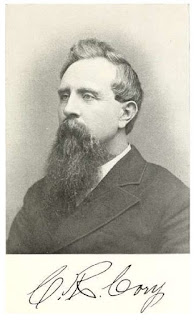 One of Fairfield's most engaging families, and perhaps one of its most iconoclastic, is the Cory family, most notably Clement R. Cory, the "ringleader" of the clan.

The publication, Fairfield: Town Under the Lake, expends some time revealing the details of the family's lives and connections.

Various biographical works from the 19th century share similar insight about Clement Cory, who was described in an old atlas as "a well known citizen and a representative of one of the early families of this part of the-state."

Cory was born in 1834 in the area just north of the Franklin-Union county line. Old atlas maps from the 1880s show the Cory name on various plots of land along the East Fork, northward toward Quakertown.

The short biography on Clement:

"He was reared a farmer. He had good educational advantages in his youth, and was for four years a student at Asbury University, and after leaving college turned his attention to teaching."

As an educator, the research says, Cory became somewhat prominent in the state, serving as the first superintendent of schools in Franklin County, a 7-year term that began in 1873. It is worth noting that manifold changes in the 1860s in how schools were run would have had an impact on Cory's role as an administrator.

Cory was also a student of law, not a surprising vocation in those days for educated men, though he apparently did not practice the profession.

He also served several terms in the Indiana General Assembly. He was listed as a Democrat early on but evidently shifted toward the Republicans later.

It's perhaps as important to identify Cory with his relations than his own family. Logans, Smolleys, Irwins, Husteds, Hubbards are all listed when discussing Clement's kin.

Cory died on April 17, 1909. Part of the obituary explained the cause of death:

"On the morning of Saturday the 17th, he started out to walk to the home of his niece, Mrs. Frank Husted. While ascending the hill in a wooded pasture, weary and his body enfeebled by the burden of years beyond the allotted three score and ten, he fell to the earth and a hemorrhage caused his death. Thus beneath the open heaven, surrounded by trees, his spirit returned to the Maker who gave it.”

Marilyn, Julie and Jim Senefeld, in Town Under the Lake, do a nice job exploring the Cory family's idiosyncrasy. For example, Clement and his wife, Mary, were evidently divorced although it was a fairly well-kept secret.

"Local marriage records show that Clement R. married Henrietta Logan on July 9, 1896. The 1900 census of Fairfield Township shows Mary Cory, age 68, as the head of house living in the same dwelling as her daughters, Maude Smolley and Noree, and daughter-in-law, Cora Cory. They also have a servant in the house by the name of Sara. The same census shows Clement R. Cory, age 66, as the head of another house living with his new wife Henrietta Logan, age 41."

The Cory family was also somewhat influential in the world of music in the Franklin County area. Harriet Cory is described as "a lady of much literary ability, has written several songs and other verses, and has contributed many excellent articles to the children's department of the Western Christian Advocate."

The Franklin County Historical Society has plenty on the Cory family. It's difficult to establish their true value to the community but without doubt, prominence in the late 1800s did not dictate living in larger towns. One could presume that the Cory family found Fairfield to be of substance.

They owned a sizable amount of land in the valley, including a house on Main Street.

Part of the Cory history was lost during a major fire in Fairfield in 1897.