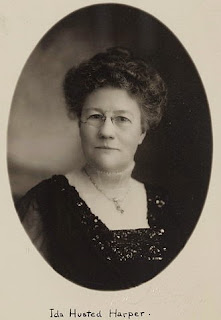 To get a sense of Ida Husted Harper, one needs to review the state of women's affairs in Indiana in the 19th century.

According to the Indiana Magazine of History:

"Divorce laws specified that husbands bear the expenses of court action and alimony; remarried women could not sell or give away their property with or without their husbands' consent; and possession of all birth control devices was illegal. In addition, widowers received all of their deceased wives' property, while widows were required to divide their husbands' property with their children."

What makes Ida Husted Harper unique is that she was considered one of the most prominent female voices in the search for equality among genders.

What makes her an enigma is that she walks both sides of the line. Still, her thoughts and beliefs resonate in a very unusual way in the 21st century.

She was born in Fairfield in 1851, the eldest of three children. Interested in obtaining good educations for their children, her parents later moved the family to Muncie.

In 1868, Ida entered Indiana University but left after one year to become -- at age 18 -- the high school principal at Peru, Ind. Three years later she married Thomas W. Harper and moved with him to Terre Haute where he later became city attorney and chief legal counsel for Eugene B. Debs' Brotherhood of Locomotive Firemen and where she began her career as a feminist.

Debs himself was an interesting bird, having established himself as the leading proponent of socialism through workers rights. He also ran for president in 1912 -- while in prison.

Ida Husted's foray into women's rights came in the form of her writing, which gathered a robust following in the 1880s. Her columns in the Terre Haute newspapers eventually caught the eye of leading national suffrage groups. Her writings were so popular that they appeared on the front page of the paper. Her early work, however, appeared without a byline.

As time went on, her prestige grew and she eventually helped establish a voice for reform candidates in national politics.

Quite a resume for a woman from Fairfield.

Nancy Baker Jones, writing for the IMH in 1977, claimed "Ida challenged the dominant view of women and women's place in late 19th century society. But Harper herself was deeply affected by that society, as her views on women's rights clearly show. Not willing to accept the role assigned to 19th century women, she also was unable or unwilling to argue consistently for full equality between the sexes."

Perhaps she sought to define "a better yet socially acceptable position for women, a position between submissiveness and full equality."

"The philosophy of the feminine ideal made its mark on Harper, for throughout her writings ran one constant assumption —that a woman would marry and have a family. She also believed that women were the moral superiors of men and that women's participation in activities traditionally proscribed to men would raise the quality of those activities. Often she stereotyped women as gossiping, flirtatious, jealous, and unreliable. Yet she could also write of their strength, suffering, and sisterhood."

In a sense, Ida believed women were nearly perfect. Equal, certainly, to men, but superior in so many ways that they rarely needed to prove it.

"Harper believed many men feared the results if women were given equal rights. Men were afraid that when women became independent that their charm would disappear and that their spiritual influence would disappear."

As she matured, she apparently became obsessed with the climbing divorce rate -- only to find herself divorced in 1890. She worked for stronger divorce laws as a way of keeping marriages intact, since she believed marriage was a proper position for women. Equality defined, one would assume.

"Ambivalence was evident again in Harper's attitude toward working women, especially working wives. She wrote in November 1882 that working women in general never surpassed mediocrity because they brought a divided energy to every business pursuit. Their energies were split between work and home in every case."

But it was the suffrage issue that she took to heart. She equated it with the temperance movement and believed the two issues were too powerful to ignore. She was not vague in her beliefs on these matters.

In January, 1883, she went so far as to say that temperance was "undoubtedly the most important issue before the country, for women are not suffering half so badly from being deprived of the franchise as they are from the evils caused by intemperance. And yet, if they do not vote 'til the temperance question is disposed of, I am afraid Gabriel will have blown his horn and ordered the polls closed."

THE DIVORCE MILL OF INDIANA