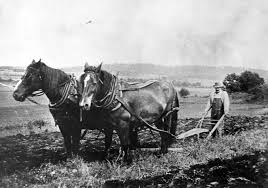 Three distinct times in the 19th century can be affixed to "depression" in one form or another: 1825, when Brookville's economy collapsed; 1873, when the railroad building glut triggered a series of financial disasters; 1893, also blamed on the railroad's systematic collapse as well as bank failures linked to the value of gold and silver.

The 1893 depression was considered the second-worst in American history -- until the Great Depression of the 1930s. Depending, perhaps, it's hard to tell which was worse.

A Wikipedia entry on the 1893 depression:

"As a result of the panic, stock prices declined. 500 banks were closed, 15,000 businesses failed, and numerous farms ceased operation. The unemployment rate in Pennsylvania hit 25%, in New York 35%, and in Michigan 43%."

As in other downturns, not much of this would seem to have had a direct impact on the people of the East Fork, though money is still money and feeding a family depends on the ability to obtain resources.

What was Fairfield's economy?

First, in any given decade of the 19th century, the overall population of the valley was no more than 300 people. Alleging a quarter of that was "employable," a general male work force was probably not in excess of 40 or 50. "Employable" would also have meant boys over the age of 12, when the distinction between 'child labor' and 'helping hand' was somewhat vague.

In the years following the Civil War, one could assume something of a shortage of such male labor. The casualty rate was not incidental and some men perhaps stayed on after the war as part of an occupation force in the defeated South.

By the 1870s, that tended to stabilize. If men stayed at home rather than leave for work in the new and diverse factories in Connersville or Hamilton or Cincinnati, they'd likely have been farmers.

It is important to understand that the need for manual labor was very real in the days when machines were either not yet invented or too expensive for many rural Hoosiers.

Being a hired hand was a fairly standard profession for a single man in that era. At best, such a hired hand would be given room and board in exchange for a small wage. He might also be given a share of the crop that he could sell as his annual nest egg.

Young women were also at times employed as live-in housekeepers. Their pay could probably be considered somewhat negligible. Most women stayed at home, maybe took in sewing or ironing, perhaps sold eggs for 3 cents a dozen.

Fairfield itself had a few businesses, the main ones being attached to the Loper Carriage Company. Merchants often hired helpers for a variety of tasks. Wages were low. The cost of living was commensurate with that. Most laborers owed no money because they had no capability to obtain a loan.

Families built a room on the back when Grandma turned sick.

Some men would work the roads as employees of the county or township. A few would raise tobacco or cut lumber to be hauled to the Mullin sawmill at the edge of the Whitewater River.

There was probably a bum or two.

Somebody would sell fish he'd caught that day, probably for a nickel. Catfish, worth more than river suckers.

Life would change as the 20th century arrived but it would be many years before life moved out of town and onto the highway.

Once America got wheels, all bets were off.

AN OVERVIEW OF INDUSTRY

An ancient publication entitled An Illustrated History of Indiana (1874) is one of those jumbled and hyperbole-laced books that met the standard for excellence for its time. References are vague, facts are self-imposed and ... well, it makes for great reading.

This one covers a lot of turf, including the state of manufacturing and agriculture for Indiana during that time. An excerpt:

There is no commanding position in the State at which even a fifth of the whole business will ever be concentrated. Madison, Indianapolis, Richmond, Fort Wayne, Logansport, Lafayette, Terre Haute, South Bend, Michigan City, Evansville, and many places on the Ohio, are all fast becoming great commercial centers, and the railroads and other improvements now in progress, and the facilities that shall hereafter be afforded to the enterprising businessmen of the State, point to no particular city with any assurance of its precedence.

During those days, Indiana's primary export crops were pork and wheat flour, with corn and coal somewhere on the list. But there was more, much more.

It has truthfully been said that the public convenience and the general good, not State pride, is building our cities. The numerous canals and railroads which intersect each other at many points in the State, afford great facilities for transportation, so that our producers can reach any market desired at a nominal expense.

The book goes on to discuss some of the foibles of how agriculture suffered and grew with peaks and valleys in the markets, and how farming interests grew together to stabilize the industry to the point that they had been "enabled to regulate the cost of transportation, and to prevent, in a great measure, damaging fluctuations in the markets."

Farming was in good hands. Outside the field, the 1874 analysis:

The manufacturing industry of Indiana has not prospered in the last five years more than it will in the next. There is a brilliant prospect for a great future advancement in this branch of business. Indeed, this department of enterprise cannot be regarded as more than fully begun; and from the present indications, its future growth is guaranteed.