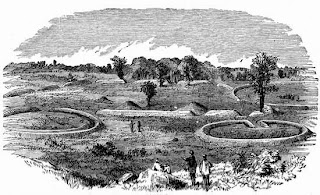 In digging through the dusty files for details about the esteemed Dr. George W. Homsher, I came across some other interesting characters.

And as history would have it, these people are propped up as quite valuable to the growth of Hoosier intellect. It's difficult to argue with that, if the biographies are accurate.

Why would anybody lie about that?

One such person is Rufus Haymond, mentioned in the same breath with Amos Butler in the establishment of a working, practical state scientific research/study organization.

Such an organization was founded in Brookville in 1881 by Butler and Haymond, who is described in the Indiana Magazine of History as "the first productive zoologist in Indiana after Thomas Say, 'Father of American Zoology,' who died at New Harmony in 1834."

Haymond is important to Homsher's work in a number of ways, mainly because he explains it in detail in letters published in the 1880s as Homsher began to unravel the  mysteries of the ancient Mounds people who inhabited most of the Ohio Valley in the first or second century BEFORE Christ.

Haymond (born 1805) was a Virginian, moved to Brookville in 1826 after visiting a relative and liking the place too much to leave. He was in his 70s when Homsher began to promote his work.

The biography on Haymond says "his motive for staying is not easily understood since the settlement of Brookville was suffering a severe economic depression at that time. The most probable explanation is that he had a keen interest in nature and found the region an ideal locality for the exercise of this interest."

While he was studying in the Whitewater Valley, which would have included many junkets to Fairfield, he published extensive works about bird life in SE Indiana, some of which was published in the Academy of Natural Sciences of Philadelphia in 1856.

When you're published in Philly, you're no longer just Fairfield. You are important. Or so sayeth Ben Franklin, founder of the Metamora canal boat.

Haymond's prestige spread amid his leadership in creating the Brookville Society of Natural Science. He was also considered a cultural and educational inspiration in the Brookville area and was a role model for the aforementioned Butler, born in 1860 and the recognized founder of the society.

Butler offers an interesting history in its own right. Evidently his interest in birds and science so absorbed him that he failed his other college courses.

Haymond, quoted in letters in August Reifel's 1915 Franklin County history, explained what Homsher found when he started digging into the past. In truth, the whole history was quite complex. The mounds were quite common across the valley and their origins difficult to establish.

"Since the organization of the local society, much attention has been given to this interesting subject by (Dr.) Homsher, of Fairfield, who is the curator of this department.

"A survey of the entire county, with a careful study of all details and materials, is included in the plan of operations. This labor has so far been extended over the townships of Springfield, Brookville, Bath and Fairfield only, but with results highly satisfactory for the observers.

"On this small area no less than 42 distinct works have been noted, and, in many cases, explored. Many interesting and some rare specimens of the relics and handiwork of the ancient builders have been reclaimed."

Naturally today, such explorations would be handled much differently. In Homsher's time, they just dug up the stuff and stashed it.

Much of Homsher's work was still in the research stage at the time because of its complexity. Scientists were reluctant to publish conflicting data, and there was plenty of that.

Haymond described the mounds, which were found south of Fairfield in some cases, as being about 10 to 12 feet high and "so situated with reference to each other that a person standing on a mound in the most northern part of the county, overlooking the valley of the river, could see the next mound below him, and from the second,the third was in view, and so with all the others, thus forming a chain of observatories, from which the approach of an enemy could be telegraphed with great celerity from one to the other, either by smoke or some other intelligible signal."

He also writes in Reifel's book that "the Mound-builders were a people possessing rare good taste, which is evidenced by the situation of their mounds. These were always built in picturesque positions, either on the highest grounds, or if in the valleys, upon the edges of the highest river terraces, overlooking the water and the lower portions of the valley."

Haymond is buried in Old Brookville cemetery, across from the old high school.

IN SHORT, WHO WERE THE MOUND BUILDERS?

The varying cultures collectively called Mound Builders were prehistoric inhabitants of North America who, during a 5,000-year period, constructed various styles of earthen mounds for religious and ceremonial, burial, and elite residential purposes. These included the Pre-Columbian cultures of the Archaic period; Woodland period; and Mississippian period; dating from roughly 3,400 BC to the 16th century AD, and living in regions of the Great Lakes, the Ohio River valley, and the Mississippi River valley and its tributaries.