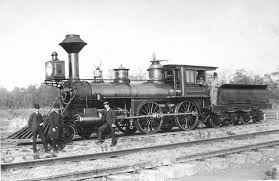 It's possible to overstate the importance of the railroad to the history of Fairfield, primarily because no railroad was ever built there.

The railroad's impact on the Whitewater Valley is enormous, and that is not an overstatement.

When we consider that virtually all business in the 19th century was local, it becomes easier to connect Fairfield and the East Fork with the commerce that linked the major cities of America.

Once the railroad was rooted, it literally became the bloodstream of the continent. Its arrogance as a result was the cause of some of the more calamitous economic downturns as well, but for the moment, that is not the topic.

The idea of a network of railroad lines took form as early as 1830, though the actual railroad was something far less impressive.

In Indiana, the government and private investors were busy plowing pathways to be used as roads, all of them leading to ... the canals.

America ran by boat. Slowly, for sure, and often unpredictably, but ... it ran.

The Indiana Magazine of History explains:

"Though railroads had their champions in the early days of Indiana, few regarded them as competitors of waterways, but at the best they could be used only as feeders for those highways (canals, rivers and lakes)."

In 1829, he urged a railroad from Lawrenceburg up the Whitewater Valley, crossing the National Road (U.S. 40) in Wayne County, northward to Fort Wayne.

Ray was a builder. He wanted Indiana to move its agriculture and he realized that the sluggish canals were doomed, a full 20 years before the actual crash occurred.

Oddly, the business that profited Brookville the most was indeed the Whitewater Canal, a canal that ironically was the first in the state to be supplanted by a railroad.

Its topography, which made the canal system difficult to maintain, was its inevitable undoing, the IMH says.

"The Whitewater Valley possesses steep wooded hills along its sides, which give it a scenic beauty which rivals the Mohawk Valley of New York even the Moselle Valley in Europe, but which are the cause of frequent and serious floods."

A flood in 1847 wrecked the locks at Hagerstown, and repairs were excessive.

By 1865, the railroad was boss and the line through Brookville made for good business between Cincinnati and all points north and west.

The IMH quotes a Brookville man, John C. Shirk, in 1925 about the coming of the railroad:

"I was a small boy when the railroad was completed to Brookville, but I can remember some of the things that occurred at that time.

"The canal gave satisfactory service when operating, but the trouble was frequent rains and freshets carried away the dams and often washed out long distances of the canal banks, so that the expense of keeping it up was so great that it did not pay to keep it in repair. It was at this time the company sold the canal to the Big Four railroad. Brookville had for some time been without transportation facilities to Cincinnati."

There are complexities in understanding who ran the Whitewater Valley line, mergers and section selloffs being part of how the railroad did business, largely free of much government intervention. Railroad was King in America. When it moved, the nation moved with it.

Railroads were inclined to build extremely short stretches of track to serve towns, largely as a result of consistent support from the Indiana legislature in the late 1840s. Towns were made or broken by the presence of a rail line. Investors played on faith, which was generally rewarded.

Sometimes not. Bankruptcies were typically complicated and investors were often at the mercy of men who had little interest in efficiency of operation. It was at times difficult to ascertain true value of equipment, stock and intangible worth.

When a railroad eventually connected Indianapolis with St. Louis, the Indiana economy began to emerge. Interestingly, the rail line went across the Mississippi River on a bridge designed by James B. Eads, son of Thomas Eads, who had once lived briefly in Fairfield.

Yeah, you can get there from here.

"The year 1869, when the road was actually started, was a notable one in railroading. The greatest railroad event of the year was driving the last spike in the first great transcontinental railroad, now the Union Pacific. However, many lesser events were transpiring. It was a time of great, almost feverish, railroad expansion; and this, as has been noticed, became over-expansion."

Meanwhile, the robust rail line from Indianapolis to St. Louis began running into financial problems. Expenses often overwhelmed income. Debt was high, interest on loans excessive ... the railroad spent most of the 1880s in court.

Finally it was reorganized and was making a profit by the end of the decade.

The complexities of how the railroads were run will overwhelm us. If your town was on a railroad line, you probably had something of a business that profited from it. The railroads themselves simply existed.

One report says that farmers who lived near proposed railroad spurs were so eager to have the rails laid that they often donated land for the right-of-way, rather than bother with selling it.

Interurban railroads began to emerge near the end of the 19th century, passenger trains that connected larger cities. Brookville was at one time part of such a spur. By about 1910, virtually every sizable community in Indiana was privy to a rail connection.

An Interurban connecting Richmond, Connersville and dozens of other towns in between was proposed in 1895 but wasn't fully operational for another decade.