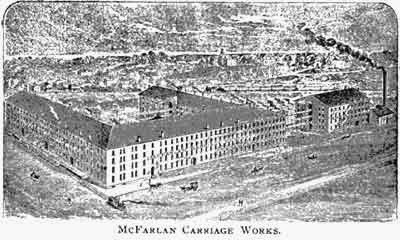 He was essentially driven out of business by the competition —  namely a hard-driving industrial giant named John McFarlan of Connersville.

McFarlan's story is quite amazing and he's probably the main reason the city became a manufacturing hub that endured for decades. Thousands owed their living to Connersville industries, many of which were in the city as a result of McFarlan's drive.

The story is fairly simple. Loper was making carriages in Fairfield and had decided to open a showroom in Connersville, and he apparently had plans to start making buggies in the city. Not a bad idea, considering ... it was a hub of commerce.

McFarlan was building his own buggies and had the foresight to do more creative marketing of his products. He paid better than Loper did and evidently was the owner of a business that thrived on pilfering away more talented workers. The competition between Loper and McFarlan was genuine, intense and ongoing. Loper pulled back on plans to open a factory in Connersville, since McFarlan had control of most of the industrial necessities —  access to the railroad, natural gas for heating and fuel ... as well as local government support.

By the late 1880s, McFarlan was outdistancing himself from Loper and all other comers in the buggy-carriage industry, which was prominent in most towns across America. The country traveled by horse and buggy. Sales were often confined to local residents, though McFarlan saw the need to expand beyond the local market.

A bit of biography on McFarlan:

He was born in London, England in 1822 and at age 8 moved with his family to Hamilton County, Ohio. Early on, he worked as a carriage blacksmith near Cincinnati before moving to Cambridge City. Soon after his arrival in Connersville in 1856, McFarlan purchased several local buggy and carriage manufacturers.

In 1857, he organized the McFarlan Carriage Company, which effectively centralized a portion of Connersville's carriage manufacture under his control.

The McFarlan Carriage Company's first factory was located at 6th and Central streets in quarters formerly occupied by the Ware and Vetch Carriage Company, one of the firms McFarlan purchased the previous year. McFarlan remained in the 6th and Central factory for 30 years, but in 1887 the need for room to expand the carriage operation forced him to look for a new factory site.

McFarlan's initial success in consolidating a number of small carriage firms under his control in 1856-57 led him to attempt a similar move in 1887 when he formed the Connersville Industrial Park. McFarlan intended to attract manufacturers and suppliers of carriage and buggy equipment to the park and thereby lower his own costs while providing a steady market for other manufacturers.

One of the first firms to join the McFarlan Carriage Company in the park was the Ansted Spring Company; Ansted-owned enterprises eventually dominated manufacturing in the park.

McFarlan became a very BIG shot in Fayette County and he did everything right. His industrial park lured many companies that supplied parts and services for his buggy company. Companies that would eventually join the automobile industry set up shop there. McFarlan had also cornered the market on natural gas, which had been piped in from Rush County.

When the buggy industry began to falter, his company built automobiles. The 1909 McFarlan Six was quite the car, selling for about $2,000.

Later on as the industry matured, McFarlan was a luxury automobile owned by celebrities of the day such as William Desmond Taylor, Wallace Reid, Fatty Arbuckle, Paul Whiteman, Jack Dempsey and Virginia governor E. Lee Trinkle. Al Capone bought a McFarlan for his wife, Mae, in 1924 and bought a second one in 1926.

McFarlan died a month after the company's first car was introduced. 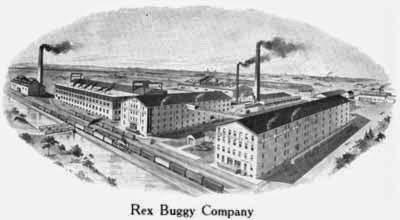 The tangled connections among various manfacturers related to the buggy industry are diverse.

"The Rex Buggy Mfg.Co. was organized in 1898 with an authorized capital stock of $65,000 by Charles C. Hull and a group of Connersville and Indianapolis businessmen who included William H. Harris, Herman Munk, Col. James E. Roberts, and Frank G. Volz. They purchased the former Munk & Roberts Furniture Company factory and began crafting horse-drawn buggies and light carriages that were marketed under the Rex and Yale trade names."

Connersville, Ind., June 9, 1916 — The Rex Buggy Co., of this city, which for many years has been actively engaged in the buggy business, has now practically ceased all activities in connection with the horsedrawn vehicle and has turned over the entire plant to the manufacture of car tops, and the trimming and painting of bodies.

If you've heard of Connersville Rex, this would be the place.

Loper vs. McFarlan, the fight

An excerpt from "Custom Built by McFarlan: A History of the Carriage and Automobile," by  Richard A. Stanley (2012):

"Excitement at the (Fayette County) fairgrounds wasn't limited to viewing the exhibits and socializing. Bantering back and forth among exhibitors over whose product was the best was a common pastime that was usually given and taken in good humor, but could lead to flaring tempers and fisticuffs or more serious eruptions. Such was the case at the 1881 county fair. The account in one of the local newspapers read as follows:

"Some of the employees of the carriage factories of J.B. McFarlan, of this city, and George Loper, of Fairfield indulged in a row Thursday afternoon  on the fairgrounds over the merits of the work on exhibition  from their respective shops. Fortunately the fracas was quelled before much blood was let. The arm of the law apparently felt the situation should not be passed over as the "McFarlan boys" who participated in the fight were charged with inciting a riot. The case was settled a few months later in January 1882, when the local court acquitted them of the charge.

"Both J.B. McFarlan and George Loper had records of high quality workmanship and had previously won premiums at the county fair. The workers that were involved were showing a certain amount of pride by their actions, but nobody else found it to be acceptable behavior at an event geared for family entertainment.

"The 1882 County Fair was apparently less exciting as there was no record of anyone running afoul of the law. However, McFarlan found it to be quite profitable as he sold 16 vehicles to fairgoers. Those purchasing side-bar buggies were Lee Roberts, Horry Clifford, Charles Jackson, Elijah Jemison, Berry Meek, Wellington Beeson, Lycurgus Beeson, John Murphy, Alf Corbin, W.V. Spivey, Clark Porter, William Rertch, and Lewis Simler.  Alex Edwards and Doc Sparks each purchased a Jagger wagon and J.H. Manlove a platform Kellog."


Sources: Diverse, most of which contain similar content in varied formats. The Connersville Chamber of Commerce produced a book for the city's bicentennial celebration of 2013. I'd gamble that the Fayette County library can help you with that. There are books on the Connersville sesqui (1963) available on Amazon.com.

A website called COACHBUILT.COM is a very interesting way to squander time.

Here are some ads and photos I've snipped from that website. 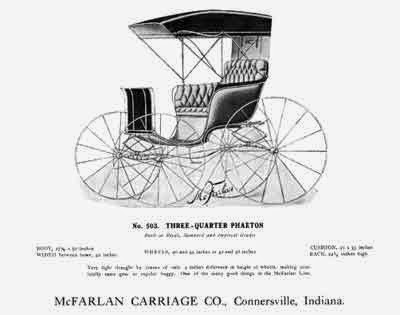 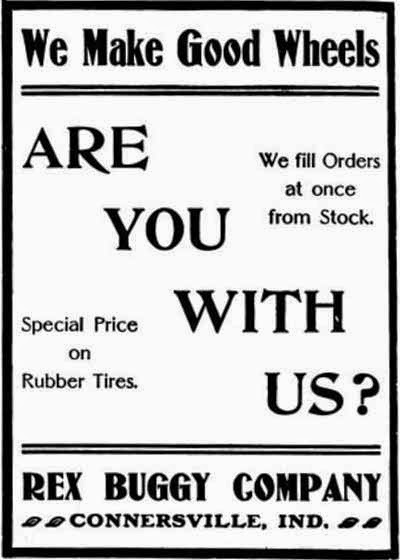 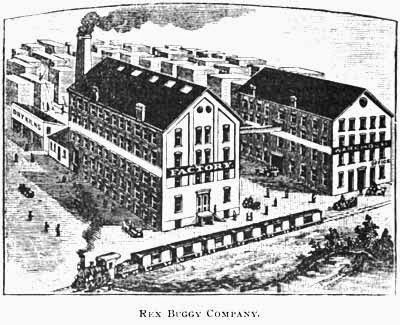 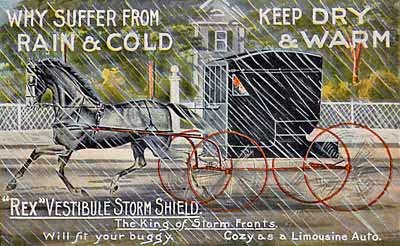 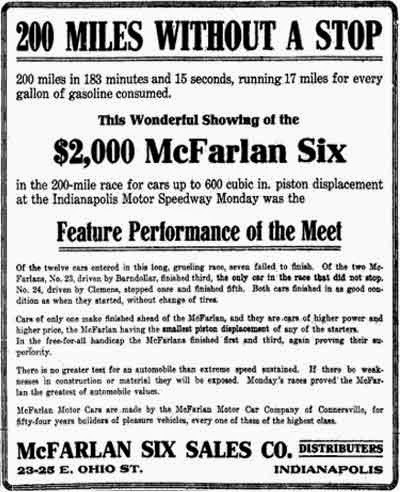